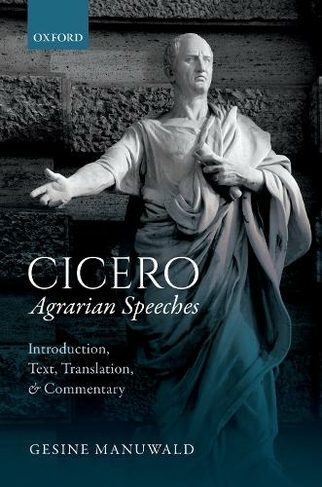 The Agrarian Speeches (Orationes de lege agraria) were delivered in January 63 BCE, just after Cicero had entered office as consul; they are his inaugural orations and therefore the first element of his consular activity. They not only provide valuable testimony for approaches to agrarian legislation in the late Republic, but also show how the new consul presented himself before the Senate and the People at the beginning of his consular year, a significant political event for which very few extensive sources remain. These speeches are also significant in demonstrating Cicero's rhetorical virtuosity and the sophistication of his political tactics in arguing against a proposal for a grand scheme of buying, selling, and allocating land put forward by the Tribune of the People, P. Servilius Rullus. Delivered in the same year as his arguably more famous orations against Catiline, they have nevertheless found less attention in modern scholarship. This edition offers a comprehensive introduction, a revised Latin text alongside a new English translation, and the first detailed commentary on the corpus, which, besides addressing numerous linguistic and textual issues, also explains the complex legal and historical situation and illustrates Cicero's sophisticated argumentative techniques. Drawing on the contemporary resurgence of academic interest in political oratory, it aims to bring these neglected speeches to a wider audience and will be particularly suitable for both scholars and students interested in Cicero, oratory, Roman law, or the history of the Roman Republic.

Gesine Manuwald is Professor of Latin at University College London. Her research interests cover Roman oratory, drama, and epic, and also reception studies, especially in the field of Neo-Latin literature. She has published widely across all of these subjects.