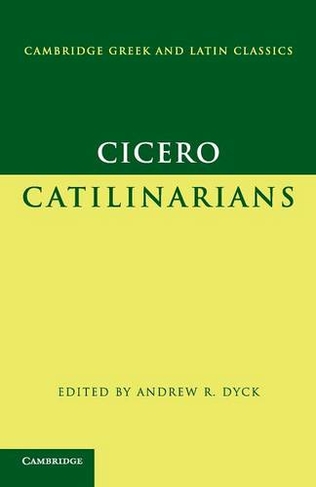 By Marcus Tullius Cicero (Author), Andrew R. Dyck (Contributor)
Paperback
https://www.whsmith.co.uk/products/cicero-catilinarians/marcus-tullius-cicero/andrew-r-dyck/paperback/9780521540438-12-000.html N/A
GBP
Availability
Currently unavailable. We dont know when or if this item will be back in stock
Free Saver Delivery on orders over £25
Details
FREE SHIPPING over £25 for Saver Delivery
Share

As consul in 63 BC Cicero faced a conspiracy to overthrow the Roman state launched by the frustrated consular candidate Lucius Sergius Catilina. Cicero's handling of this crisis would shape foreverafter the way he defined himself and his statesmanship. The four speeches he delivered during the crisis show him at the height of his oratorical powers and political influence. Divided between deliberative speeches given in the senate (1 and 4) and informational speeches delivered before the general public (2 and 3), the Catilinarians illustrate Cicero's adroit handling of several distinct types of rhetoric. Beginning in antiquity, this corpus served as a basic text for generations of students but fell into neglect during the past half-century. This edition, which is aimed primarily at advanced undergraduates and graduate students, takes account of recently discovered papyrus evidence, recent studies of Cicero's language, style and rhetorical techniques, and the relevant historical background. 2 Maps