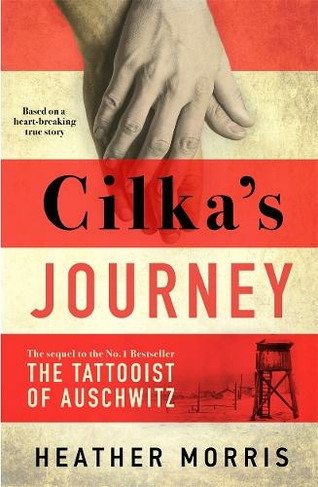 Cilka's Journey The sequel to The Tattooist of Auschwitz

By Heather Morris (Author)
Hardback
https://www.whsmith.co.uk/products/cilkas-journey-the-sequel-to-the-tattooist-of-auschwitz/heather-morris/hardback/9781785769047-12-000.html £11.99 rrp £14.99 Save £3.00 (20%)
GBP
Availability
In Stock
Free Delivery Available When You Spend £15 Or More
Details
Spend £15 On Eligible Products To Recieve Free Standard Delivery To You Home Or Free Next Working Day Click And Collect To Store
Share

In The Tattooist of Auschwitz, Cilka was the beautiful young girl who had received the unwanted attention of the SS Commandant at Birkenau. Forced to become his concubine, Cilka's beauty placed her in even greater danger and trauma, but may ultimately have saved her life.

Author Heather Morris learned about Cilka after growing close to Lale Sokolv - the Slovakian Jew who served as a tattooist at Auschwitz-Birkenau - and was intrigued by his story of a young girl who saved his life and was 'the bravest person' he ever met. While the horror ended for many prisoners after Auschwitz was liberated in 1945, unbelievably Cilka was arrested for sleeping with the enemy and sent to a Siberian prison camp where she would endure brutal conditions for another ten years. Confronted by death and sickness, Cilka began to nurse her fellow prisoners under the guidance of a female doctor, and despite all the pain and suffering she had endured since arriving at Auschwitz at sixteen years old, she did the unimaginable and fell in love.

Beautifully written with care and compassion, Heather has pieced together Cilka's Journey from testimonials from those who knew her both in Auschwitz and in the Siberian prison camp where she was interned. Whether you were captivated by the story of The Tattooist of Auschwitz, or you're new to Cilka's story, this sequel story is an unmissable book that will move and haunt you, but ultimately leave you feeling uplifted by the strength of the human spirit.

Cilka's Journey is a challenging piece of historical fiction based on real people and set during the events of The Holocaust, World War Two, and the aftermath of the Second World War.

'I hope that you enjoy it, not for the horror and the evil that once again I have to bring to you, but for the humanity and the compassion, and the love, and the hope. It's the hope, once again, that Cilka will bring to you the reader. She was an amazing girl. She had an amazing journey. I'm so proud to tell her story' - Heather Morris, Dymocks Books YouTube

Heather Morris is an international number one bestselling author, who is passionate about stories of survival, resilience and hope. In 2003, while working in a large public hospital in Melbourne, Heather was introduced to an elderly gentleman who 'might just have a story worth telling'. The day she met Lale Sokolov changed both their lives. Their friendship grew and Lale embarked on a journey of self-scrutiny, entrusting the innermost details of his life during the Holocaust to her. Heather originally wrote Lale's story as a screenplay - which ranked high in international competitions - before reshaping it into her debut novel, The Tattooist of Auschwitz. Her second novel, Cilka's Journey, is a follow up to The Tattooist of Auschwitz.