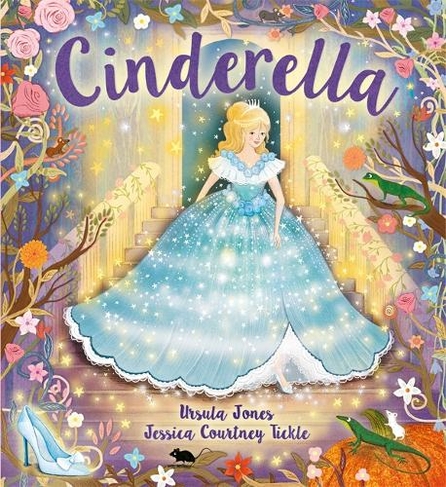 A sumptuously illustrated retelling of the classic fairytale, Cinderella. Rediscover the magic of Cinderella and enter a world of enchantment and romance with this exquisite picture book retelling. Award-winning author Ursula Jones breathes new life into this enduring and best-loved fairytale with her characteristic blend of warmth, humour and charm. Paired with dazzlingly intricate illustrations, this is a wonderfully evocative, beautiful and contemporary edition of this timeless classic.

Ursula Jones (Author) Ursula Jones is an award-winning author and actress. She has written many books for children, including The Witch's Children and the Queen, winner of a Nestle Gold Award, The Witch's Children go to School, winner of the Roald Dahl Funny Prize, and the highly acclaimed The Princess Who Had No Kingdom. Ursula lives in London and France.Jessica Courtney Tickle (Illustrator) Jessica Courtney-Tickle graduated from Kingston University in July 2014 where she studied illustration and animation and found a specialism in children's picture books. She loves working with colour, texture and lots and lots of characters. Jessica lives in Cambridgeshire. She was longlisted for the Waterstones Children's Book Prize 2017 (The Story Orchestra, Four Seasons in One Day), and shortlisted for the 2014 Prize for Illustration with the AOI and the London Transport Museum.