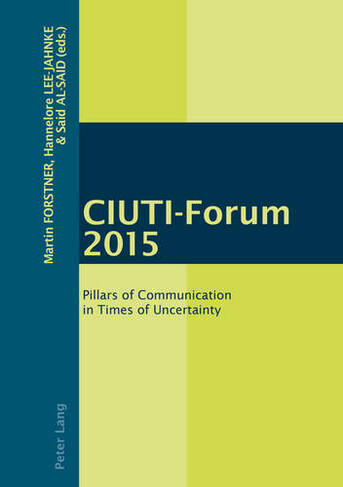 CIUTI-Forum 2015: Pillars of Communication in Times of Uncertainty (New edition)

The speakers of the 2015 edition of the Forum all showed a particular interest in interdisciplinary research and training. The representatives of translation industry, international and national entities and organisations, professional associations, trainers and researchers offered deep insights into their everyday work, displaying all the problems encountered and solutions found. One of the main themes was also the Silk Road Project and its multifaceted approaches - linguistic, cultural and economic - with all its drawbacks, pitfalls and challenges. In the section Transnational Private Public Partnerships the speakers stressed the importance of a global network of quality oriented partners. Interdisciplinary highlights were speakers from other disciplines who addressed in their speeches problems concerning world economy and science, which are of vital importance to all major actors. 46 Illustrations, unspecified