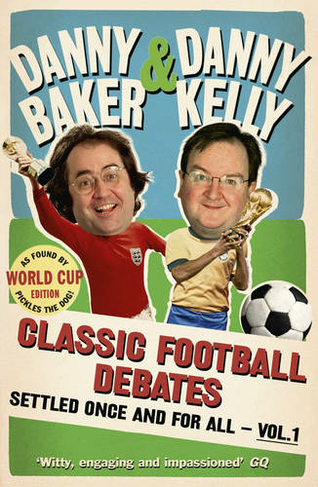 Classic Football Debates Settled Once and For All, Vol.1

At last! The award-winning Baker & Kelly bring you the most entertaining, radical and unreliable football book ever published. The Two Dannys argue the toss, spill the beans and chew that fat about everything and anything from the biggest questions down to stuff they have frankly invented themselves. Which club has the handsomest fans? Who is the greatest player of all time? Pele? Maradona? Puskas? Rougvie? Have foreign players helped or hindered the English game? Well, Marco Boogers, well? And who was the greatest football dad, Fred Baker or Andy Kelly? Now with even more footballing facts, myths and legends, the paperback asks (and answers) hard-hitting questions, such as, what was the greatest ever World Cup? Just how much pathetic World Cup tat can one own, Danny Kelly? And where do all those beautiful women in the crowd come from? A cornucopia of footballing fun and well-crafted wisdom that is certain to sell like beer-flavoured crisps. Baker & Kelly: Sometimes right sometimes wrong - but always certain.

Broadcast legend Danny Baker was the pioneering presenter of the original football phone-in 6-0-6 on the BBC until he was fired. Twice. He is now back on the show long term. Danny also has his own show on BBC Radio London - The Danny Baker Show. He also began the whole Own Goals and Gaffes Xmas video industry later jumped on by everyone from Neil Kinnock to Judge Judy and for this he apologises unreservedly. He neither likes nor cares about any other football club than his own (Millwall). Publishing overlord Danny Kelly is former editor of NME, Q and Total Sport , and founder of the Football365 website. He has a daily show on TalkSport and broadcasts regularly on BBC FiveLive. He appals Baker by knowing 97.4% of everything there is to know about football and 85.3% about every other sport. Except tennis, which is rubbish because it requires servants to fetch the balls. He loves Spurs but annoys those who sit around him at White Hart Lane by booing the team as they run out just in case. Danny Baker and Danny Kelly have broadcast their award-scooping stuff for years now and have co-written a weekly sports column for the Times, until that was sacked too. Immediately after, their Baker & Kelly football podcast became the country's no.1 sports download. NUMBER ONE. There, suck that up all you lily livered hair-trigger quaking BBC execs.This is their first book.