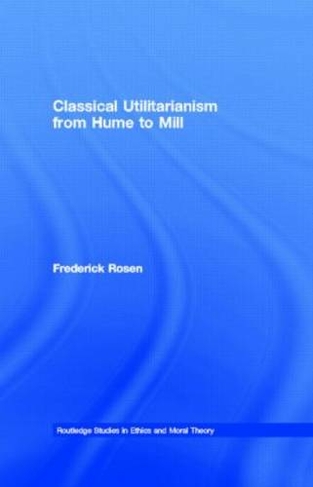 Classical Utilitarianism from Hume to Mill: (Routledge Studies in Ethics and Moral Theory)

This book presents a new interpretation of the principle of utility in moral and political theory based on the writings of the classical utilitarians from Hume to J.S. Mill. Discussion of utility in writers such as Adam Smith, William Paley and Jeremy Bentham is included.

Frederick Rosen is Professor of the History of Political Thought at University College London. He has served as General Editor of The Collected Works of Jeremy Bentham, Director of the Jeremy Bentham Project, and Director of the Centre for Politics, Law and Society at UCL. Among his books are Jeremy Bentham and Representative Democracy(1983) and Bentham, Byron and Greece: Constitutionalism, Nationalism, and Early Liberal Political Thought (1992). He has co-edited several books, was the founding editor of Utilitas, and has contributed numerous articles to various learned journals.