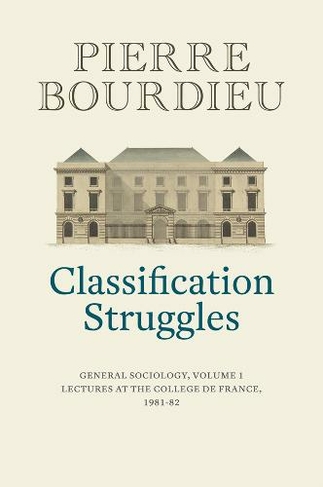 This is the first of five volumes that will be based on lectures given by Pierre Bourdieu at the College de France in the early 1980s under the title 'General Sociology'. In these lectures, Bourdieu sets out to define and defend sociology as an intellectual discipline, giving it his own distinctive twist. In doing so he introduces and clarifies all the key concepts for which he has become so well-known, such as field, capital and habitus, concepts that continue to shape the way that sociology is practiced today. In this first volume, Bourdieu focuses on the fundamental social processes of naming and classifying the world, the ways that social actors use words to construct social objects and the struggles that arise from this. The sociologist encounters a world that is already named, already classified, where objects and social realities are marked by signs that have already been assigned to them. In order to avoid the naivete and confusion that stem from taking for granted a world that has been socially constituted, sociologists must examine the part played by words in the construction of social things - or, to put it differently, the contribution that classification struggles, a dimension of all class struggles, play in the constitution of classes, including classes of age, sex, race and social class. An ideal introduction to some of Bourdieu's most important concepts and ideas, this volume will be of great interest to the many students and scholars who study and use Bourdieu's work across the social sciences and humanities, and to general readers who want to know more about the work of one of the most important sociologists and social thinkers of the 20th century.

Pierre Bourdieu (1930-2002) was one of the most influential sociologists and anthropologists of the late twentieth century. He was Professor of Sociology at the College de France and Director of Studies at the Ecole des Hautes Etudes en Sciences Sociales. His many works include Outline of a Theory of Practice, Distinction: A Social Critique of the Judgement of Taste, The Rules of Art, The Logic of Practice and Pascalian Meditations.