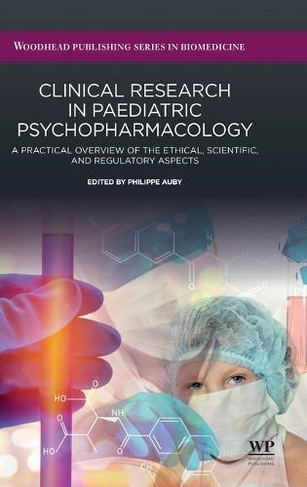 Clinical Research in Paediatric Psychopharmacology: A Practical Overview of the Ethical, Scientific, and Regulatory Aspects (Woodhead Publishing Series in Biomedicine)

Also available on eBook for £168.35. Click here to purchase from Rakuten Kobo

Dr Philippe Auby is a Child and Adolescent Psychiatrist. He started his residency training in Psychiatry in 1986 and received his MD from the Toulouse University of Medicine, France. In 1989 and 1990, for his military service, the author worked as a psychiatrist in South East Refugee Camps in Thailand. After an initial training in adult psychiatry, he completed a board certification in child and adolescent psychiatry and a post-graduate diploma in psychology. His main research interests are in child and adolescent psychiatry, consultation/liaison psychiatry, and intercultural psychiatry. In 1996, he joined a CRO based in Paris before moving to Eli Lilly, then BMS in France and the European Headquarter in Belgium. Between 2004 and 2007, working for Otsuka America Pharmaceutical Inc., he developed global paediatric projects in psychopharmacology. Early 2007, he moved to Lundbeck to create the International Clinical Research Department of Paediatric Neuro-Psychiatry. In 2016, he went back to Otsuka and is now CEO and President of Otsuka Pharmaceutical Development and Commercialisation Europe.