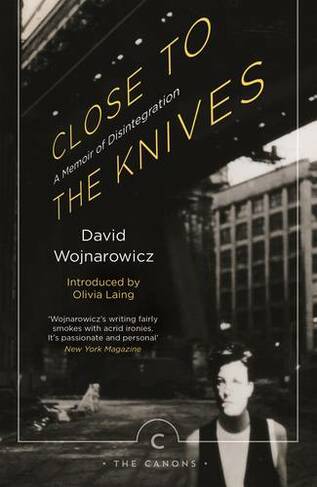 Close to the Knives: A Memoir of Disintegration (Canons Main - Canons edition)

Also available on eBook for £6.35. Click here to purchase from Rakuten Kobo

I am glad I am alive to witness these things; giving words to this life of sensations is a relief. Smell the flowers while you can. Close to the Knives is the artist, writer and activist David Wojnarowicz's extraordinary memoir. Filthy, beautiful, and sharp to the point of piercing, it is both an exploration of the world seen through the eyes of an artist, and a moving portrait of a generation living, grieving, and dying through the AIDS crisis. It is a triumphant hymn of resistance, and a dizzying celebration of the joys of seeing and living in the world.

David Wojnarowicz authored five books. His artwork is in numerous private and public collections, including the Museum of Modern Art and Whitney Museum of American Art, New York; Los Angeles County Museum of Art; and the National Gallery of Canada, Ottawa, among other institutions. In addition to his artwork, Wojnarowicz attained national prominence as a writer and advocate for AIDS awareness, and for his stance against censorship. He died from AIDS in 1992.