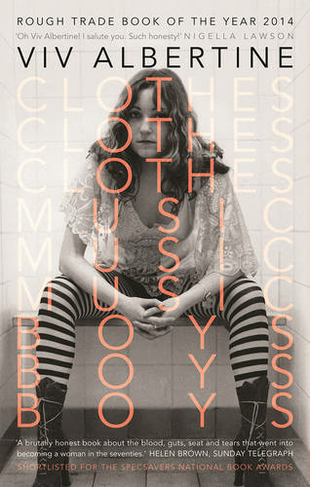 SUNDAY TIMES MUSIC BOOK OF THE YEAR ROUGH TRADE BOOK OF THE YEAR MOJO BOOK OF THE YEAR In 1975, Viv Albertine was obsessed with music but it never occurred to her she could be in a band as she couldn't play an instrument and she'd never seen a girl play electric guitar. A year later, she was the guitarist in the hugely influential all-girl band the Slits, who fearlessly took on the male-dominated music scene and became part of a movement that changed music. A raw, thrilling story of life on the frontiers and a candid account of Viv's life post-punk - taking in a career in film, the pain of IVF, illness and divorce and the triumph of making music again - Clothes Music Boys is a remarkable memoir.

Songwriter and musician Viv Albertine was the guitarist in cult female punk band The Slits. She was a key player in British counter-culture before her career in TV and film Directing. Her first solo album The Vermilion Border was released in 2012, and her memoir, Clothes, Clothes, Clothes, Music, Music, Music, Boys, Boys, Boys was a Sunday Times, Mojo, Rough Trade, and NME Book of the Year in 2014, as well as being shortlisted for the National Book Awards.