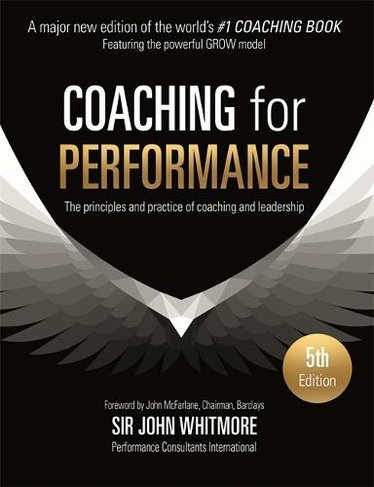 By John Whitmore (Author)
Paperback
https://www.whsmith.co.uk/products/coaching-for-performance-the-principles-and-practice-of-coaching-and-leadership-fully-revised-25th-a/john-whitmore/paperback/9781473658127-12-000.html £15.19 rrp £18.99 Save £3.80 (20%)
GBP
Availability
In Stock
With Free Standard Delivery To Your Home Or Store
Details
Spend £15 On Eligible Products To Recieve Free Standard Delivery To You Home Or Free Next Working Day Click And Collect To Store
Share

Coaching for Performance is the #1 book for coaches, leaders, talent managers and professionals around the world. This is the definitive, updated and expanded edition. "The proven resource for all coaches and pioneers of the future of coaching." Magdalena N. Mook, CEO, International Coach Federation (ICF) An international bestseller, featuring the powerful GROW model, this book is the founding text of the coaching profession. It explains why enabling people to bring the best out of themselves is the key to driving productivity, growth, and engagement. A meaningful coaching culture has the potential to transform the relationship between organizations and employees and to put both on the path to long-term success. Written by Sir John Whitmore, the pioneer of coaching, and Performance Consultants, the global market leaders in performance coaching, this extensively revised and extended edition will revolutionize the traditional approach to organizational culture. Brand new practical exercises, corporate examples, coaching dialogues, and a glossary, strengthen the learning process, whilst a critical new chapter demonstrates how to measure the benefits of coaching as a return on investment, ensuring this landmark new edition will remain at the forefront of professional coaching and leadership development. "Shines a light on what it takes to create high performance." John McFarlane, Chairman, Barclays, Chairman, TheCityUK

Sir John WhitmoreSir John Whitmore is the pioneer of coaching in the workplace and Co-Founder of Performance Consultants International, the market leader in coaching globally. He was the first to take coaching into organizations in the early 1980s and creator of the GROW model, the most used coaching model in the world. Honoured for his lifetime's work with the President's Award from the International Coach Federation, Sir John's global contribution to coaching and leadership has helped to drive organizational transformation. Through his books - most notably Coaching for Performance - workshops and speeches, he defined the principles of performance coaching and midwifed its birth from sporting excellence, transpersonal psychology, and emotional intelligence. Coaching for Performance is widely considered to be the bible of coaching and Sir John's vision, philosophy, and methodology has inspired millions of managers, leaders, and coaches across four decades to bring the best out of themselves and others. Sir John died in 2017, his extraordinary legacy is continued by his colleagues. The new edition of Coaching for Performance to publish in 2017 was completed before his death. Performance Consultants InternationalFounded in the early 1980s by Sir John Whitmore, Performance Consultants' mission is to transform the relationship between organizations and employees. Their stance is simple: organizations are sitting on a great untapped reservoir of potential - that of their people. They partner with organizations globally on effective leadership development, coaching and culture transformation. Market leaders in their field, they invite organizations to improve performance through their leaders and thereby reap rewards for people, profit and planet. Their flagship development programme named after this book is Coaching for Performance, it is considered the industry gold-standard and delivered in over 40 countries and in 23 languages.