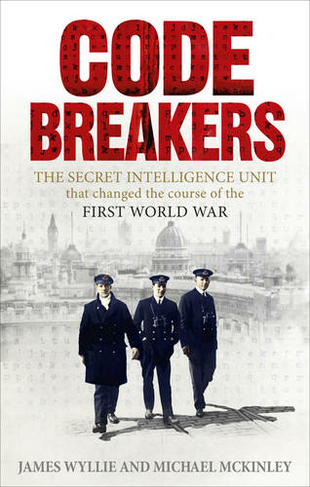 Codebreakers: The Secret Intelligence Unit that Changed the Course of the First World War

While battalions hunkered down in the mud of western France, anti-aircraft guns took aim at zeppelins floating over the capital, and Atlantic convoys tried desperately to evade German U-boats, another, more secret battle was underway. Down gloomy Whitehall corridors a team of eccentric and pioneering codebreakers were fighting for information that would give them a decisive advantage over the enemy. The new technologies of wireless and telegraph were vital for governments and the military, but vulnerable to interception. Cracking the codes used to protect them quickly became a crucial part of the war effort, and London Room 40, led by the charismatic and cunning 'Blinker' Hall, was at the centre of this push for intelligence. Not content to wait for enemy communications to come to him, Hall was soon running agents in other countries, particularly in neutral USA where German saboteurs were intent on damaging the essential flow of munitions to Britain. The stories of Bletchley Park and the spies of the Second World War are well known, but it was Room 40 and their colleagues across the intelligence services that started it all. From the docks of New York City to shady Cairo hotels, this is the gripping and fast-paced story of spies, codebreakers and saboteurs.

James Wyllie (Author) James Wyllie is an author, award-winning screenwriter and broadcaster. He published Goering and Goering: Hitler's Henchman and His Anti-Nazi Brother in 2010, and has worked on numerous films for the BBC, Film4 and Talkback among others. He has written for a number of TV drama series, including The Bill, The Tribe, and Atlantis High.Michael McKinley (Author) Michael McKinley is an award-winning author, filmmaker, journalist and screenwriter. He is based in New York and has written for a range of publications including The New York Observer, The New York Daily News and The Chicago Sun-Times. He is the author of a number of books and has made documentaries for CNN, The Discovery Channel and CBC.