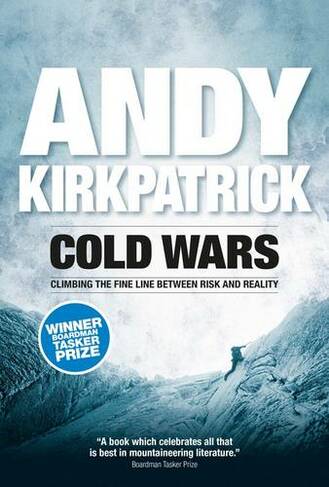 Cold Wars: Climbing the fine line between risk and reality

By Andy Kirkpatrick (Author)
Paperback
https://www.whsmith.co.uk/products/cold-wars-climbing-the-fine-line-between-risk-and-reality/andy-kirkpatrick/paperback/9781906148461-12-000.html £11.95 rrp £12.99 Save £1.04 (8%)
GBP
Availability
In Stock
Free Delivery Available When You Spend £25 Or More
Details
Spend £25 On Products To Receive Free Standard Delivery To Your Home Or Free Next Working Day Click And Collect To Store
Share

Andy Kirkpatrick is an award-winning author and climber. With a reputation for seeking out routes where the danger is real and the return questionable, he has pushed himself on some of the hardest walls and faces around the world. He was born and raised on a council estate in Hull, one of the UK's flattest cities, and suffered from severe dyslexia which went undiagnosed until he was nineteen. Thriving on this apparent adversity, Andy transformed himself into one of the world's most driven and accomplished climbers and an award-winning writer. In 2001 he undertook an eleven-day solo ascent of the Reticent Wall on El Capitan, Yosemite, one of the hardest solo climbs in the world. This climb was the central theme of his first book Psychovertical, which won the 2008 Boardman Tasker Prize for Mountain Literature. His second book, Cold Wars, won the 2012 Boardman Tasker Prize. He is also the author of 1001 Climbing Tips and Unknown Pleasures. In 2014 he partnered BBC One's The One Show presenter Alex Jones as she climbed Moonlight Buttress in Zion National Park in aid of Sport Relief. Andy lives in Ireland with his wife Vanessa.