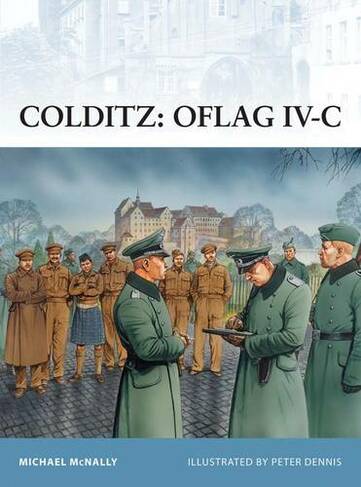 By Michael McNally (Author), Peter Dennis (Illustrator)
Paperback
https://www.whsmith.co.uk/products/colditz-oflag-ivc-fortress-no-97/michael-mcnally/peter-dennis/paperback/9781846035838-01-000.html £11.95 rrp £12.99 Save £1.04 (8%)
GBP
Availability
Currently unavailable. We don't know when or if this item will be back in stock
Free Saver Delivery on orders over £20
Details
FREE SHIPPING over £20 for Saver Delivery
Share

Immortalized in film and literature, the 15th century castle of Colditz is remembered not for tales of medieval chivalry or withstanding withering sieges but for its darker past, when it was converted by the Nazis into a prisoner-of-war camp called Oflag IV-C. A natural choice for a prison, Colditz had been used successfully during the First World War and had gained a reputation for being impossible to escape from. But this reputation was dramatically shattered by the ingenuity of the prisoners interned there. This book examines the history of Colditz, the methods used to keep prisoners inside her formidable walls, and the techniques by which her prisoners attempted to escape. Illustrations

Michael McNally is 39 years of age and was born, raised and educated in London. Of Irish parentage (one from each side of the border) Michael has had an active interest in Irish history, and military history in particular, from boyhood. He is married with two children and lives in Germany where he works for a major insurance company. The author lives in Germany.