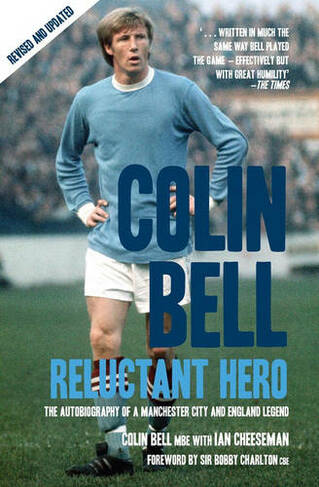 Colin Bell - Reluctant Hero: The Autobiography of a Manchester City and England Legend

Most Manchester City supporters regard Colin Bell as their club's best ever player. He graced the midfield during their greatest years as they won all domestic and European honours, and represented England 48 times before a serious knee injury ended his career prematurely when he was just 29. Now, in this revealing autobiography, 'King Colin' has opened up. He talks about never knowing his mother, who died when he was a baby, and of being brought up by his aunt and then his father and older sister. He then leads us through the glory years, singles out his greatest opponents and compares the modern game with the era he dominated, before sharing his views on the infamous tackle in a Manchester derby that ended his footballing dreams. In a remarkable development, he reveals for the first time his private battle against cancer and explains how this book has helped to save his life. With tributes from the likes of Malcolm Allison, Sir Geoff Hurst and Sir Bobby Charlton, Colin Bell - Reluctant Hero is the story of a footballer whose brilliance on the field demanded adulation but who was never comfortable in the spotlight. A player who truly preferred to let his feet do the talking. 1 x 8pp b/w

Colin Bell played for Manchester City between 1966 and 1979, during which time he made just under 500 appearances and scored 152 goals.Ian Cheeseman is a reporter for BBC GMR and has been a Manchester City fan all his life. He is 45 years old and is married with two children.