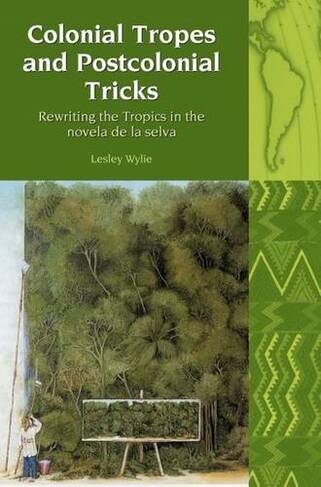 By Lesley Wylie (Author)
Hardback
https://www.whsmith.co.uk/products/colonial-tropes-and-postcolonial-tricks-rewriting-the-tropics-in-the-novela-de-la-selva-liverpool-la/lesley-wylie/hardback/9781846311956-01-000.html £85.00
GBP
Availability
Currently unavailable. We don't know when or if this item will be back in stock
Share

The vision of the South American rainforest as a wilderness of rank decay, poisonous insects, and bloodthirsty 'savages' in the Spanish American novela de la selva has often been interpreted as a belated imitation of European travel literature. This book offers a new reading of the genre by arguing that, far from being derivative, the novela de la selva re-imagined the tropics from a Latin American perspective, redefining tropical landscape aesthetics and ethnography through parodic rewritings of European perceptions of Amazonia in fictional and factual travel writing. With particular reference to the four emblematic novels of the genre - W. H. Hudson's Green Mansions [1904], Jose Eustasio Rivera's La voragine [1924], Romulo Gallegos's Canaima [1935], and Alejo Carpentier's Los pasos perdidos [1953] - the book explores how writers throughout post-independence Latin America turned to the jungle as a locus for the contestation of both national and literary identity, harnessing the superabundant tropical vegetation and native myths and customs to forge a descriptive vocabulary which emphatically departed from the reductive categories of European travel writing. Despite being one of the most significant examples of postcolonial literature to emerge from Latin America in the twentieth century, the novela de la selva has, to date, received little critical attention: this book returns a seminal genre of Latin American literature to the centre of contemporary debates about postcolonial identity, travel writing, and imperial landscape aesthetics.

Lesley Wylie is Lecturer in Latin American Studies at the University of Leicester. Her previous books include 'Colonial Tropes and Postcolonial Tricks: Rewriting the Tropics in the novela de la selva' (Liverpool: Liverpool University Press, 2009).