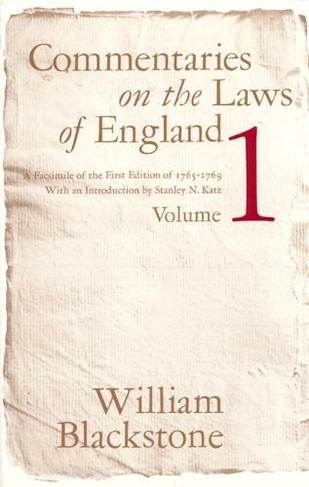 Sir William Blackstone's "Commentaries on the Laws of England" (1765-1769) stands as the first great effort to reduce the English common law to a unified and rational system. Blackstone demonstrated that the English law as a system of justice was comparable to Roman law and the civil law of the Continent. Clearly and elegantly written, the work achieved immediate reknown and exerted a powerful influence on legal education in England and in America which was to last into the late nineteenth centure. The book is regarded not only as a legal classic but as a literary masterpiece.

Stanley N. Katz is professor of legal history at Princeton University. He has written widely on English and American legal history of the eighteenth century.