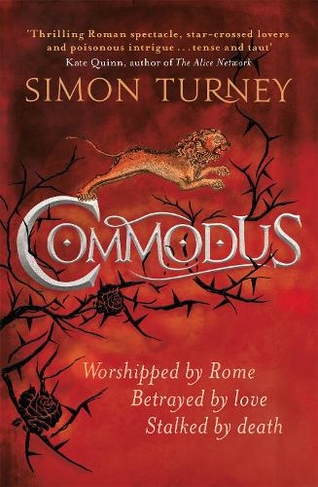 Worshipped by Rome. Betrayed by love. Stalked by death. Rome is enjoying a period of stability and prosperity. The Empire's borders are growing, and there are two sons in the imperial succession for the first time in Rome's history. But all is not as it appears. Cracks are beginning to show. Two decades of war have taken their toll, and there are whispers of a sickness in the East. The Empire stands on the brink of true disaster, an age of gold giving way to one of iron and rust, a time of reason and strength sliding into hunger and pain. The decline may yet be halted, though. One man tries to hold the fracturing empire together. To Rome, he is their emperor, their Hercules, their Commodus. But Commodus is breaking up himself, and when the darkness grips, only one woman can hold him together. To Rome she was nothing. The plaything of the emperor. To Commodus, she was everything. She was Marcia.

A born and bred Yorkshireman with a love of country, history and architecture, Simon spends most of his rare free time travelling around ancient sites, writing, researching the ancient world and reading voraciously.Following an arcane and eclectic career path that wound through everything from sheep to Microsoft networks and from paint to car sales, Simon wrote Marius' Mules. Now, with in excess of twenty novels under his belt, Simon writes full time. He lives with his wife and children and a menagerie of animals in rural North Yorkshire.