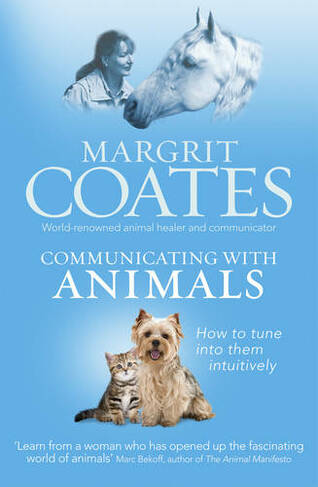 Communicating with Animals: How to tune into them intuitively

Margrit Coates's new book is essential reading for anyone who loves animals and who wishes to improve their understanding of animal behaviour. One of the world's leading animal communicators and healers, Margrit has many years' experience working closely with species of all kinds - from horses, dogs and cats, to wild life, rare breeds and rescue animals. In Communicating with Animals, she draws upon her very special gift and amazing experiences to help us connect with animals too. Using intuition, insight and common sense, she shows how to tune into what they are really thinking and feeling, helping us bond with them at an incredibly deep level. Her powerful techniques range from communicating with the furry, feathered and scaly friends who share our homes, to larger animals such as horses and even Anne the Elephant, as well as other non-domestic creatures. Ultimately, Margrit's wish is for each one of us to be able to tune into all life around us. Besides practical exercises and handy tips, Communicating with Animals is brimming with heart-warming stories - making it a great read and a truly inspirational guide.

Margrit Coates gives consultations, runs workshops and lectures internationally, including to postgraduate students at the University of Southampton, UK and at the Open Center, New York. She is also the co-founder of Holistic Pets, a clinic offering natural treatments for horses and pets.As well as writing columns and articles for magazines, newspapers, and websites, Margrit makes frequent TV and radio appearances. She has appeared as a featured expert in several TV series including Animal Roadshow (Animal Planet), and Pet Nation ( SKY HD 1). She has also been the 'Pets Corner' columnist for the Daily Mail. Margrit's books include Healing for Horses and Angel Pets. She lives in the New Forest National Park of southern England.