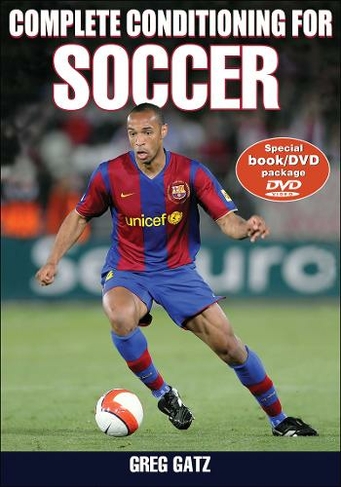 Increase strength to dribble through traffic. Pack more power into shots on goal. Improve quickness and agility to find open passing lanes and evade opponents. Complete Conditioning for Soccer shows you how to achieve all of these performance goals and more. Soccer players are faster and stronger than ever before. In this special book and DVD package, renowned soccer strength and conditioning coach Greg Gatz provides a comprehensive training approach that builds players' physical abilities as well as the soccer-specific skills required for dribbling, tackling, passing, heading, shooting, and goalkeeping. Complete with assessment tests for determining a players' fitness status and specific programs that improve balance, quickness, agility, speed, and strength, this book will help you dominate your position. The DVD puts the training into action by demonstrating key tests, exercises, and drills from the book. With nutritional guidelines as well as seasonal workouts, Complete Conditioning for Soccer provides a multidimensional training approach that will show you how to get the most from your time in the gym and on the pitch.

Greg Gatz is the director of strength and conditioning for Olympic sports at the University of North Carolina at Chapel Hill, where he has served since 1998. In addition to overseeing facility management and the organization of 20 sports teams, Gatz is in charge of program design and execution for specific teams, including men's and women's soccer, baseball, wrestling, volleyball, and track.Gatz has worked closely with several national championship teams at UNC: women's soccer (1999, 2000, 2003, 2006, 2008), men's soccer (2001), a volleyball team that finished with one of its highest national rankings ever (#12) in 2002, and the 2006 and 2007 national runner-up baseball teams.Gatz was nominated in 2001 for College Strength and Conditioning Professional of the Year by the National Strength and Conditioning Association. He holds a specialist certification from the NSCA and a level I certification in Olympic weightlifting from the United States Weightlifting Federation. A 1983 graduate of Ithaca College in New York, he competed in football and track while earning a degree in physical education.