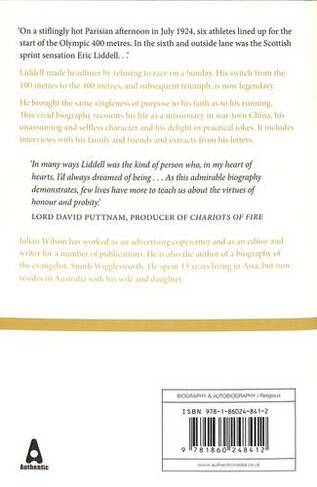 Revised edition of the biography of Olympic champion and missionary Eric Liddell. Eric Liddell, the Scottish 400m Olympic champion from the 1924 Olympic Games in Paris was immortalized in the Oscar-winning film Chariots of Fire. His story, however, goes far beyond the restrictions of a 2-hour movie. Julian Wilson's vivid biography recounts not only the highs and lows of Liddell's athletic career, including his controversial decision never to run on a Sunday, but also his life after the Olympics as a missionary in war-torn China. The book draws upon interviews with Liddell's surviving family and friends, and includes some fascinating anecdotes, reminiscences, extracts from his letters and a number of rare photographs. Click here to read a sample chapter

Julian Wilson has worked as an advertising copywriter and as an editor and writer for a number of publications. He is also the author of Complete Surrender, a biography of the Olympic athlete and missionary Eric Liddell. He spent 15 years living in Asia, but now resides in Australia with his wife and daughter