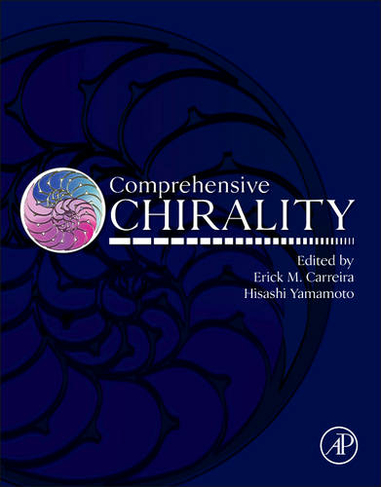 Also available on eBook for £2427.59. Click here to purchase from Rakuten Kobo

Although many books exist on the subject of chiral chemistry, they only briefly cover chiral synthesis and analysis as a minor part of a larger work, to date there are none that pull together the background information and latest advances in one comprehensive reference work. Comprehensive Chirality provides a complete overview of the field, and includes chiral research relevant to synthesis, analytic chemistry, catalysis, and pharmaceuticals. The individual chapters in each of the 9 volumes provide an in depth review and collection of references on definition, technology, applications and a guide/links to the related literature. Whether in an Academic or Corporate setting, these chapters will form an invaluable resource for advanced students/researchers new to an area and those who need further background or answers to a particular problem, particularly in the development of drugs. Contains 9 Hardbacks

Chemists' ability to perform syntheses on a routine basis is due in large part to the development of new methods for synthesizing organic molecules which would have been impossible just a few decades ago. The availability of such new methods of synthesis has increased not only the range of structures which can be assembled but also the ease and economy of synthesis. During the past 30 years of his research, Professor Hisashi Yamamoto has had a tremendous impact on the field of organic chemistry through his reports of dramatic new advances in organic synthesis. Yamamoto's publications are numerous (over 450), and almost every one of them has provided an innovative new development or idea. Applications of this original and versatile chemistry have allowed him and other scientists to realize truly efficient syntheses of organic molecules of both theoretical and practical importance. Hisashi Yamamoto has uncovered novel aspects of Lewis and Bronsted acid catalysts in selective organic synthesis. During his career he has discovered a wide variety of powerful new synthetic reactions, reagents, and catalysts based on acid catalysis chemistry. Through his dedicated efforts, Lewis and Bronsted acid are now recognized as major tools in the synthesis of both simple and complex organic molecules. Among Yamamoto's many superb contributions the following are especially worthy of mention. His research in the area of organoaluminum chemistry has had a great impact on synthetic organic chemistry. The strong Lewis acidity of organoaluminum compounds appears to account for their strong tendency to form a stable 1:1 complex. Thus, the coordination of molecules invariably causes a change of reactivity, and the coordinated group may be activated or deactivated depending upon the type of reaction. Furthermore, with coordination of organic molecules an auxiliary bond can become coupled to the reagent and promote the desired reaction. In short, the reagents make a combined Lewis acid - Lewis base attack on a substrate with less activation energy, a field opened by Yamamoto's early and highly original studies. His aluminum amide reagents for epoxide rearrangement, biogenetic-type terpene synthesis, and the Beckmann rearrangement-alkylation reaction sequence are notable examples. He was intrigued by the chemistry of the carbonyl compound-Lewis acid complex and introduced the unusually bulky organoaluminum reagents, methylaluminum bis(2,6-di-tert-butyl-4-methylphenoxide) (MAD) and aluminum tris(2,6-diphenylphenoxide) (ATPH). These reagents were successfully utilized for the selective alkylation of cyclic ketones and aldehydes to generate equatorial alcohol and an anti-Cram type product, respectively, for trans- and cis-selective Claisen rearrangement, for regioselective Diels-Alder reaction, and for epoxide-aldehyde rearrangement. The ATPH - aromatic carbonyl complex reacts with nucleophiles selectively at the para-position of the aromatic ring to generate cyclohexadiene derivatives. After these pioneering researches in Lewis acid chemistry, Yamamoto has become aware of the vast importance of chiral Lewis acids in modern asymmetric synthesis. In 1985, he first introduced binaphthol as a key ligand for chiral Lewis acid catalysts. This work was the forerunner of a vast quantity of present-day research on the binaththol based chiral Lewis acid catalyst. Based on his knowledge of organoaluminum chemistry, he designed a new and powerful organoaluminum catalyst for asymmetric hetero-Diels-Alder reaction. It was his Bronsted acid-Lewis acid combined system, however, which gave him a unique opportunity for the most efficient asymmetric Lewis acid catalyst for Diels-Alder reaction. A similar concept was employed for his catalytic asymmetric protonation under acidic conditions, which now creates a long sought proton induced asymmetric polyene cyclization. His discovery of tartaric acid based catalyst (CAB catalyst) and amino acid based catalyst led to the fi