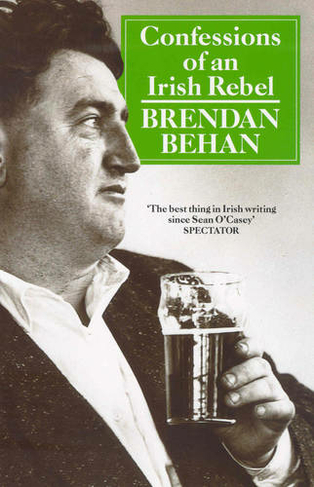 Confessions Of An Irish Rebel

The immigration man read my deportation order, looked at it and handed it back to me. 'Are you Irish?' he asked me. 'No' I said 'as a matter of fact, I'm Yemenite Arab.' Two detectives came forward who were evidently there to meet me. 'Apparently he is Brendan Behan,' they said. The immigration officer shook my hand and his hard face softened. 'Cead mile failte romhat abhaile.' (A hundred thousand welcomes home to you.) I could not answer. There are no words and it would be impertinence to try. I walked down the gangway. I was free. First published after Brendan Behan's tragic death, Confessions of an Irish Rebel picks up where Borstal Boy left off. Not only is it the last instalment of a unique and unorthodox autobiography, but of a unique and unorthodox life that was as touched with genius as it was with doom.

Brendan Behan was born in Dublin in 1923. A member of the IRA, he was sentenced to three years in Borstal in 1939 and a further fourteen years in 1942. He became a dominant literary figure almost overnight with the 1956 production of his play The Quare Fellow, based on his prison experiences. This recognition was reinforced by the success of Borstal Boy and his second play, The Hostage. Brendan Behan described his recreations as 'drinking, talking, and swimming' but no factual description could do justice to his flamboyant, larger-than-life character. Generally regarded as irreverent and unpredictable if not actually dangerous, there was nonetheless no publicity which ever obscured his marked talents or his great understanding of human nature. A man whose contemporaries include Flann O'Brien, Patrick Kavanagh and Anthony Cronin, Behan was a key part of Ireland's great modern literary tradition.Brendan Behan died in 1964.