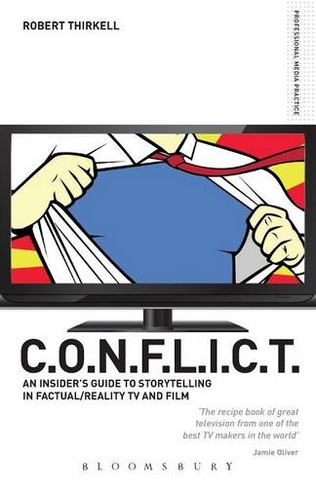 CONFLICT - the Insiders' Guide to Storytelling in Factual/reality TV & Film The C.O.N.F.L.I.C.T Toolkit for TV and Film Producers

"The recipe book of great television from one of the best TV makers in the world" Jamie Oliver Story structure is a huge weakness for many factual or reality filmmakers and TV producers, who often concentrate on subject areas and issues rather than dramatic and memorable narrative. Consequently programmes fail to attract the audience or win any awards. In this book Robert Thirkell, the international consultant known as 'The TV Troubleshooter' and renowned television producer, sets out a professional toolkit for developing a compelling storyline in factual and reality programmes and films. Based on his popular international C.O.N.F.L.I.C.T seminars, it lifts the lids on the making of leading series such as Kitchen Nightmares, Wife Swap, The Apprentice, Coastguards, Firefighters, Oprah's Big Give Fat March, Jamie's School Dinners and When Big Chef Met Little Chef as well as offering insight and advice from leading filmmakers and TV producers worldwide. The tips and tools go right the way through the filmmaking process from finding stories and characters, to structuring scripts and filming, editing, through to delivery, titles and getting people to watch.

Leading TV Producer, Robert Thirkell, is an international TV consultant with a proven track record in making hit TV documentaries and formats. Robert was Series Editor of Jamie's School Dinners and the original 'formats' Back to the Floor and Blood on the Carpet and the original producer of Troubleshooter, all BAFTA winning series. He specializes in helping broadcasters and production companies worldwide to create documentary formats, oversee new brands, and sort out problem series.