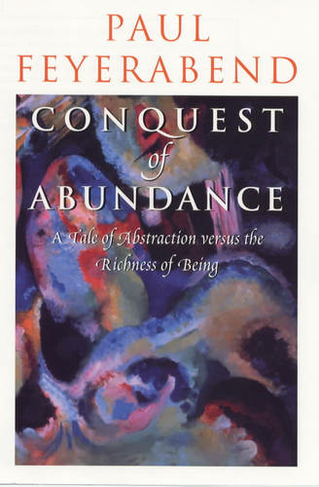 From Homeric gods to galaxies, from love affairs to perspective in painting, Paul Feyerabend revelled in the physical and cultural abundance that surrounds us. He found it equally striking that human senses and human intelligence are able to take in only a fraction of these riches. From this fraction, scientists, artists, all of us construct encompassing abstractions and stereotypes. This basic human trait is at the heart of "Conquest of Abundance", the book on which Feyerabend was at work when he died in 1994. Prepared from drafts of the manuscript left at his death, working notes, and lectures and articles Feyerabend wrote while the larger work was in progress, "Conquest of Abundance" offers up exploration and startling insights with the charm, lucidity, and sense of mischief that are his hallmarks. Feyerabend is fascinated by how we attempt to explain and predict the mysteries of the natural world, and he describes ways in which we abstract experience, explain anomalies, and reduce wonder to formulas and equations. Through his exploration of the positive and negative consequences of these efforts, Feyerabend reveals the "conquest of abundance" as an integral part of the history and character of Western civilization. ""Conquest of Abundance" should be a simple book, pleasant to read and easy to understand," he planned in his autobiography. It is a great philosopher's view of a basic yet complex human trait and how it affects our lives. Paul Feyerabend (1924-1994) was educated in Europe and held numerous teaching posts throughout his career, including at the University of California, Berkeley, from 1959 to 1990. His "Against Method" - translated into seventeen languages - is a classic of modern philosophy of science. The University of Chicago Press published his autobiography, "Killing Time", in 1995. 15 halftones, 7 line drawings