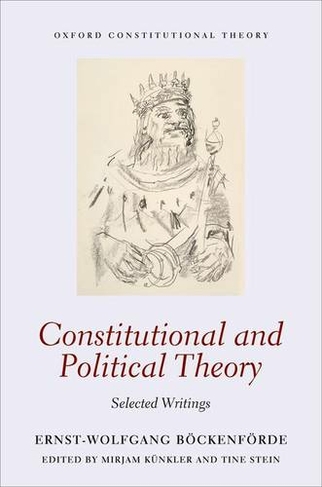 Also available on eBook for £62.99. Click here to purchase from Rakuten Kobo

Ernst-Wolfgang Boeckenfoerde (b. 1930) is one of Europe's foremost legal scholars and political thinkers. As a scholar of constitutional law and a judge on Germany's Federal Constitutional Court (December 1983 - May 1996), Boeckenfoerde has been a major contributor to contemporary debates in legal and political theory, to the conceptual framework of the modern state and its presuppositions, and to contested political issues such as the rights of the enemies of the state, the constitutional status of the state of emergency, citizenship rights, and challenges of European integration. His writings have shaped not only academic but also wider public debates from the 1950s to the present, to an extent that few European scholars can match. As a federal constitutional judge and thus holder of one the most important and most trusted public offices, Boeckenfoerde has influenced the way in which academics and citizens think about law and politics. During his tenure as a member of the Second Senate of the Federal Constitutional Court, several path-breaking decisions for the Federal Republic of Germany were handed down, including decisions pertaining to the deployment of missiles, the law on political parties, the regulation of abortion, and the process of European integration. In the first representative edition in English of Boeckenfoerde's writings, this volume brings together his essays on constitutional and political theory. The volume is organized in four sections, focusing respectively on (I) the political theory of the state; (II) constitutional theory; (III) constitutional norms and fundamental rights; and (IV) the relation between state, citizenship, and political autonomy. Each of these feature introductions to the articles as well as a running editorial commentary to the work. A second volume will follow this collection, focusing on the relation between religion, law, and democracy.

Ernst-Wolfgang Boeckenfoerde is a Professor emeritus of Public Law at the University of Freiburg. He is one of the best-known and most influential German legal scholars in the post-war period. From 1983-1996 he served as Justice of the Federal Constitutional Court of Germany. In the 1960s, Boeckenfoerde was one of the founders of the journal Der Staat - Zeitschrift fur Staatslehre, OEffentliches Recht und Verfassungsgeschichte. He is a member of the Social Democratic Party and served as a long-time legal advisor to it. Mirjam Kunkler is Senior Research Fellow at the Swedish Collegium of Advanced Study; Tine Stein is Professor of Political Theory at the University of Kiel