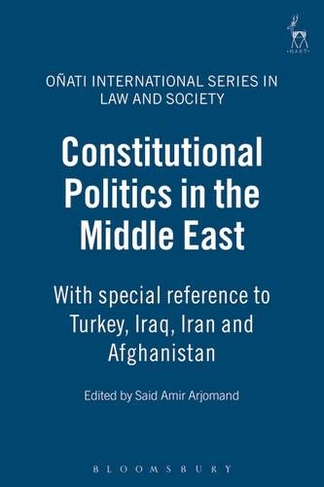 Constitutional Politics in the Middle East: With Special Reference to Turkey, Iraq, Iran and Afghanistan (Onati International Series in Law and Society)

This book is the first comparative and interdisciplinary study of constitutional politics and constitution-making in the Middle East. The historical background and setting are fully explored in two substantial essays by Linda Darling and Said Amir Arjomand, placing the contemporary experience in the contexts, respectively, of the ancient Middle Eastern legal and political tradition and of the nineteenth and twentieth century legal codification and political modernization. These are followed by Ann Mayer's general analysis of the treatment of human rights in relation to Islam in Middle Eastern constitutions, and Nathan Brown's comparative scrutiny of the process of constitution-making in Iran, Afghanistan and Iraq with reference to the available constitutional theories which are shown to throw little or no light on it. The remaining essays are country by country case studies of Turkey, Afghanistan and Iraq, the case of Iran having been covered by Arjomand as the special point of reference. Mehmet Fevzi Bilgin examines the making and subsequent transformation of the Turkish Constitution of 1982 against current theories of constitutional and deliberative democracy, while Hootan Shambayati examines the institutional mechanism for protecting the ideological foundations of the Turkish Republic, most notably the Turkish Constitutional Court which offers a surprising parallel to the Iranian Council of Guardians. Arjomand's introduction brings together the bumpy experience of the Middle East along the long road to political reconstruction through constitution-making and constitutional reform, drawing some general analytical lessons from it and showing the consequences of the origins of the constitutions of Turkey and Iran in revolutions, and of Afghanistan and Iraq in war and foreign invasion. black & white illustrations

Said Amir Arjomand is Distinguished Service Professor of Sociology at the State University of New York at Stony Brook and the founder and President (1996-2002, 2005-08) of the Association for the Study of Persianate Societies.