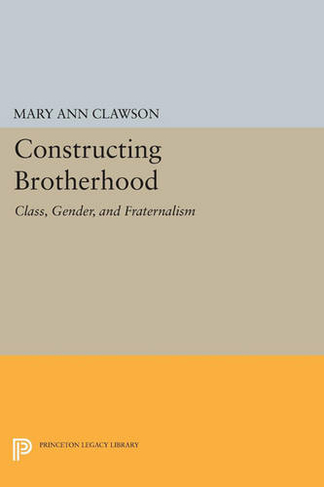 Despite the persistence of the fraternal form of association in guilds, trade unions, and political associations, as well as in fraternal social organizations, scholars have often ignored its importance as a cultural and social theme. This provocative volume helps to redress that neglect. Tracing the development of fraternalism from early modern western Europe through eighteenth-century Britain to nineteenth-century America, Mary Ann Clawson shows how white males came to use fraternal organizations to resolve troubling questions about relations between the sexes and between classes: American fraternalism in the 1800s created bonds of loyalty across class lines and made gender and race primary categories of collective identity. British men had symbolically become stone masons to express their commitment to the emerging market economy and to the social value of craft labor. Clawson points out that American fraternalism fulfilled similar purposes, as fraternal organizations reconciled individualism and mutuality for many who were discomfited by the conflict of egalitarian principles and capitalist industrial development. Fraternalism's extraordinary appeal rested also on the assertion of masculine solidarity in the face of feminine claims to moral leadership. Nevertheless, visions of solidarity were contradicted when fraternal organizations became increasingly entrepreneurial, seeking to maximize their own growth through systematic marketing of membership. Originally published in 1989. The Princeton Legacy Library uses the latest print-on-demand technology to again make available previously out-of-print books from the distinguished backlist of Princeton University Press. These editions preserve the original texts of these important books while presenting them in durable paperback and hardcover editions. The goal of the Princeton Legacy Library is to vastly increase access to the rich scholarly heritage found in the thousands of books published by Princeton University Press since its founding in 1905.