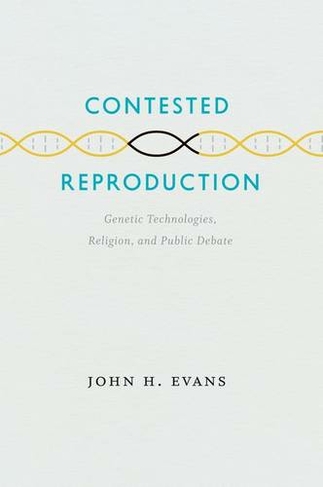 Scientific breakthroughs have led us to a point where soon we will be able to make specific choices about the genetic makeup of our offspring. In fact, this reality has arrived - and it is only a matter of time before the technology becomes widespread. Much like past arguments about stem-cell research, the coming debate over these reproductive genetic technologies (RGTs) will be both political and, for many people, religious. In order to understand how the debate will play out in the United States, John H. Evans conducted the first in-depth study of the claims made about RGTs by religious people from across the political spectrum, and "Contested Reproduction" is the stimulating result. Some of the opinions Evans documents are familiar, but others - such as the idea that certain genetic conditions produce a 'meaningful suffering' that is, ultimately, desirable - provide a fascinating glimpse of religious reactions to cutting-edge science. Not surprisingly, Evans discovers that for many people opinion on the issue closely relates to their feelings about abortion, but he also finds a shared moral language that offers a way around the unproductive polarization of the abortion debate and other culture-war concerns. "Contested Reproduction" is a prescient, profound look into the future of a hot-button issue. 3 line drawings, 3 tables

John H. Evans is associate professor of sociology at the University of California, San Diego, and the author of Playing God? Human Genetic Engineering and the Rationalization of Public Bioethical Debate, also published by the University of Chicago Press.