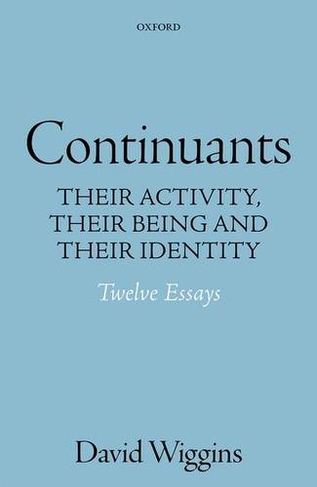 Continuants: Their Activity, Their Being, and Their Identity

This volume gathers twelve essays by David Wiggins in an area where his work has been particularly influential. Among the subjects treated are: persistence of a substance through change, the notion of a continuant, the logic of identity, the co-occupation of space by a continuant and its matter, the relation of person to human organism, the metaphysical idea of a person, the status of artefacts, the relation of the three-dimensional and four-dimensional conceptions of reality, and the nomological underpinning of sortal classification. From a much larger body of work the author has selected, edited or annotated, and variously shortened or extended eleven pieces. He has added an Introduction and one completely new essay, on the philosophy of biology and the role there of the idea of process. The collection begins with an essay postdating his Sameness and Substance Renewed (2001), which amends and upstages his earlier presentation of his sortalist conception of identity. In subsequent essays and the introduction Wiggins examines the contributions to these subjects made by Heraclitus, Aristotle, Leibniz, Roderick Chisholm, Hilary Putnam, Sydney Shoemaker, Michael Ayers, Saul Kripke, W. V. Quine, David Lewis, Fei Xu, and others.

David Wiggins was born in London in 1933 and educated at St Paul's School and Brasenose College, Oxford, where he was chiefly devoted to Greek and Roman literature, and history and philosophy, both ancient and modern. He was a Civil Servant in the Colonial Office, 1957-9. A Proctor Visiting Fellow at Princeton in 1956-7, Wiggins went on to become a Lecturer and then Fellow in Philosophy at New College Oxford before moving to Bedford College, London where he workedas a professor from 1967-80. He then went on to become a Fellow at University College, London and professor at Birkbeck College before taking the position of Wykeham Professor of Logic, University of Oxford. Now in retirement, his chief preoccupations are metaphysics, philosophy of language, andphilosophy of the practical. His previous publications include Needs, Values, Truth: Essays in the Philosophy of Value (Oxford University Press) and Ethics: Twelve lectures on the Philosophy of Morality (Harvard University Press).