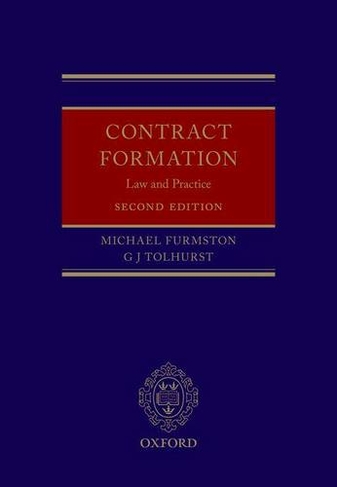 Also available on eBook for £163.67. Click here to purchase from Rakuten Kobo

This new and updated edition provides a scholarly and practical analysis of the legal principles which govern the formation of contracts in English law, offering those involved in litigation and in drafting contracts a guide to the application of those principles in practice. The book comprehensively reviews all the classical rules governing contract formation with extensive coverage of difficult areas such as certainty, conditional contracts, good faith negotiations, auctions, tenders, on-line contracting and the assessment of conduct and silence in contract formation. It also discusses the efficacy, problems and rules around modern contracting, in particular the use of heads of agreement, letters of intent, letters of comfort and the methods of resolving a battle of the forms. In this second edition a chapter has been added on consideration and estoppel. Although this work is based on English law, the authors draw upon decisions in other jurisdictions such as Australia, Canada, the United States, Singapore and New Zealand, where these inform the development of principles in English law.

Michael Furmston is Professor of Law at Sunway University in Malaysia. He studied law at Oxford and has taught at Birmingham, Belfast, Oxford, Bristol, and Singapore Management University. He was called to the Bar at Gray's Inn in 1960 and has been a Bencher of Gray's Inn since 1989. He is a member of the UNIDROIT working group which produced the General Principles for International Commercial Contracts.Greg Tolhurst is a Professor of Law at Sydney Law School. He is also an editor of the Journal of iContract Lawr, a co-editor of the iCommercial Law Quarterlyr, a consultant editor of iCarter on Contractr, and a consultant with Herbert Smith Freehills. His research interests lie in the areas of contract law and personal property and in particular where these two areas meet such as in sales of goods, bailment and dealings in intangibles.