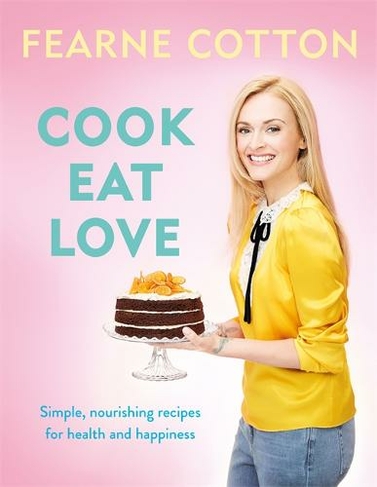 When Fearne's not making us laugh onscreen or keeping us company on the radio, you'll find her in the kitchen cooking up a storm. Easy, healthy recipes that are fun to make and delicious to eat - these are the recipes Fearne loves and has become famous for. Recipes she can't wait to share with you, too. With chapters covering fresh and delicious breakfasts to start your day well; simple, sumptuous lunches to enjoy at home and on the run; and comforting dinners that show you how to eat the rainbow, Cook. Eat. Love provides over 100 recipes that will have you eating happily and healthily at every meal time. A pescatarian herself who cooks meat for her family, Fearne includes recipes that can cater for both and be packed with goodness either way. You'll also find plenty of ideas for elevenses, afternoon treats, baked goods and desserts that use plenty of natural ingredients to make those sweet treats guilt-free and just as satisfying. From Thai Coconut Soup to Quick and Healthy Pizzas; Roast Chicken Cashew and Chilli salad to Salted Caramel Chocolate Slice and Beetroot Cupcakes, Cook. Eat. Love is guaranteed to bring joy to your kitchen and beyond.

Fearne has been on our screens presenting live TV since the age of 15 when she was spotted by ITV's Disney Club. In her role as team captain, Fearne is currently filming the 16th series of Celebrity Juice. Her other programmes include The BBC Music Awards, Top of the Pops with Reggie Yates, BAFTA red carpet coverage with Dermot O'Leary for E! and Children in Need Rocks with Chris Evans. In 2005 she joined Radio 1 where she spent 10 years, initially co-hosting morning shows with Reggie Yates, and then moving onto the UK Top 40 show before taking over the prestigious weekday morning slot in 2009. The show attracted over 4 million listeners and in 2012 she won a Sony Gold Award for the show. With many millions of followers on social media, she is ranked amongst the world's 250 most influential tweeters. Fearne lives in London with her family. She is the bestselling author of COOK HAPPY, COOK HEALTHY.