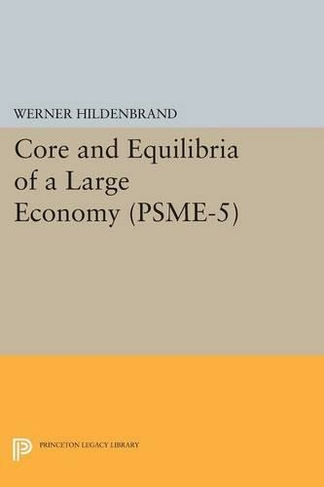 Core and Equilibria of a Large Economy. (PSME-5): (Princeton Studies in Mathematical Economics)

Can every allocation in the core of an economy be decentralized by a suitably chosen price system? Werner Hildenbrand shows that the answer is yes if the economy has "many" participating agents and if the influence of every individual agent on collective actions is "negligible." To give a general and precise definition of economics with this property he considers both economies with a continuum of agents, and a sequence of economies with an increasing number of participants. In both cases this leads to a measure theoretic formulation of economic equilibrium analysis. In the first part of the book the relevant mathematics is developed. In the second part the continuity and convexity properties of the total demand of a consumption sector are investigated. An important result is the equivalence between the core and the set of Walras equilibria for an exchange economy with a continuum of agents. The author then deals with limit theorems on the core for purely competitive sequences of exchange economies. In the last chapter the core and the set of Walras equilibria for a coalition production economy and the relation between these two equilibrium concepts are studied. Originally published in 1974. The Princeton Legacy Library uses the latest print-on-demand technology to again make available previously out-of-print books from the distinguished backlist of Princeton University Press. These editions preserve the original texts of these important books while presenting them in durable paperback and hardcover editions. The goal of the Princeton Legacy Library is to vastly increase access to the rich scholarly heritage found in the thousands of books published by Princeton University Press since its founding in 1905.