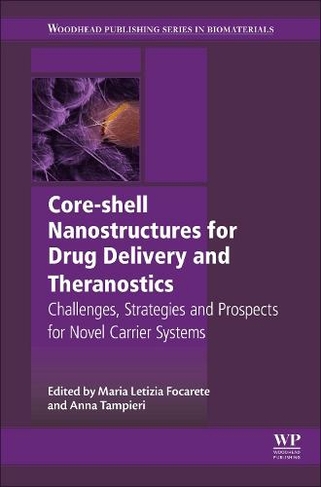 Also available on eBook for £254.99. Click here to purchase from Rakuten Kobo

Core-Shell Nanostructures for Drug Delivery and Theranostics: Challenges, Strategies and Prospects for Novel Carrier Systems contains valuable chapters that deal with the fundamentals of nanotechnology for drug delivery, recent developments and research in core-shell nanoparticles for drug-delivery and theranostic applications, and the potential and applications of core-shell nanofiber. This book is a highly valuable resource for scientists interested in the design and development of innovative drug delivery systems, researchers and graduate/postdoctoral students engaged in biomaterials for drug delivery, and R&D managers in the biomaterials and pharmaceutical industry.

Maria has authored more than 60 papers on international, peer-reviewed scientific journals and 3 book chapters.She is the inventor of 7 patents or patent applications. She has more than 100 contributions in national and international conferences in the fields of polymeric materials and electrospinning technology.Maria coordinates the interdisciplinary Research Group on Electrospinning of the University of Bologna (RGE-UNIBO, that she founded in 2006) whose activities are mostly focused on extending basic current knowledge for better control and optimization of the electrospinning process and fabricating innovative engineered nanofiber assemblies from selected polymers. She also leads the Biomaterials Laboratory activities of the Health Sciences and Technologies - Interdepartmental Center for Industrial Research (HST-ICIR) at the University of Bologna. Technology transfer is also performed, and the electrospinning technology developed in the group are now the focus of a start-up company, where Maria is member of the Scientific Advisory Board. Anna Tampieri, is the Director of the Institute of Science and Technology for Ceramics at the National Research Council of Italy, Chemist, 30 years of experience in Material Science, particularly addressed to biomimetic materials and devices for regeneration of hard and soft tissues and organs. She authored more than 250 scientific papers published on peer-reviewed Journals and about 20 book chapters (H index = 38 based on Scholar). She is inventor of 16 National and International patents, several of which are licensed to companies acting in the biomedical fields and translated to 7 commercial products. She is Editor of a monography dealing with bio-inspired approaches in regenerative medicine, and Guest Editor of several international scientific journals. Tutor of 11 Ph.D, 14 M.Sc students, and more than 20 National and International fellowships. Coordinator of 5 EC-funded Projects belonging to the 6th and the 7th European framework programmes, and WP Leader in 6 EC-funded Projects. Coordinator of several national projects. Some of the most relevant are : SMILEY EC project NMP-SL-2012-SMALL-6-310637 "Smart Nano-structured Devices Hierarchically Assembled by Mineralization Processes" (2012-2015); OPHIS EC Project "Composite Phenotypic triggers for bone and cartilage repair", NMP3-SL-2010-SMALL-3-246373 (2010-2013); TEMPLANT EC project NMP4-CT-2006-033277 "Production of new bio- ceramization processes applied to vegetable hierarchical structures" (2006-2011); NIPROGEN National project n. 731448 "Natures inspires innovative process for the development of implants for regenerative medicine with high degree of vascularization and mechanical performances" (Por Fesr 2014-2020 Emilia Romagna Region) (2016-2018); International project G12-3 "Multifunctional nanocrystalline apatites for cancer therapeutic applications" (Scientific cooperation program Galileo, Italian-French University), (2012-2013);Since 2009 she is member of the "European Technology Platform for Nanomedicine".Organizer and Chair of several National and International Symposia, Schools and Conferences on Biomaterials, among which the "International Conference of Materials in Medicine (MiMe)", Faenza (Italy), 2013; the Symposium "Regenerative Medicine", Global Biotechnology Congress, Boston (USA), 2013; the Symposium "Biomimetic Materials for Biomedical Applications", EUROMAT2009, Glasgow (UK) 2009.Senior Affiliate Member at the Methodist Hospital Research Institute, Houston, U.S.A. Associated Professor in Medical Science and Applied Biotecnology, since 2014. Scientific advisor of European commission in several programmes( EUROSTAR, NMP, ERC)Founder of the company FINCERAMICA Biomedical Solution SpA, she was the Idea-woman, then President and today is the Head of the Scientific Advisory Board. Idea-Maker of the start-up company GREENBONE ortho Srl, she is the Head of the Scientific Advisory Board. Consultant for several chemical,