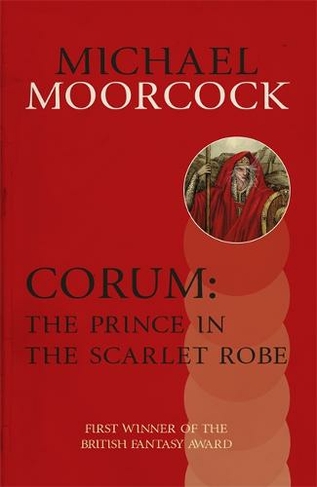 Corum: The Prince in the Scarlet Robe

Prince Corum is the last of the Vadhagh, his family and people brutally slain by the Mabden. Vowing to wreak vengeance on the killers, Corum sets out on his terrible quest only to fall in love with a beautiful Mabden woman, and to confront the fury of the Lords of Chaos. For they fear that he is the hero who could tip the balance in their cataclysmic war with the forces of Law and free his world from Chaos's vicious grip. His epic struggle against them and his ultimate victory is only bought at a considerable price. Moorcock's evocation of a rich, dark world, a time of magic, phantasms, cities in the sky, oceans of light and wild flying beasts of bronze is one of the pinnacles of modern imaginative literature. Contains THE KNIGHT OF THE SWORDS, THE QUEEN OF THE SWORDS and THE KING OF THE SWORDS

Michael Moorcock (1939-)Michael Moorcock is one of the most important figures in British SF and Fantasy literature. The author of many literary novels and stories in practically every genre, his novels have won and been shortlisted for numerous awards including the Hugo, Nebula, World Fantasy, Whitbread and Guardian Fiction Prize. In 1999, he was given the World Fantasy Life Achievement Award; in 2001, he was inducted into the SF Hall of Fame; and in 2007, he was named a SFWA Grandmaster. Michael Moorcock is also a musician who has performed since the seventies with his own band, the Deep Fix; and, as a member of the prog rock band, Hawkwind, won a gold disc. His tenure as editor of New Worlds magazine in the sixties and seventies is seen as the high watermark of SF editorship in the UK, and was crucial in the development of the SF New Wave. Michael Moorcock's literary creations include Hawkmoon, Corum, Von Bek, Jerry Cornelius and, of course, his most famous character, Elric. He has been compared to, among others, Balzac, Dumas, Dickens, James Joyce, Ian Fleming, J.R.R. Tolkien and Robert E. Howard. Although born in London, he now splits his time between homes in Texas and Paris.