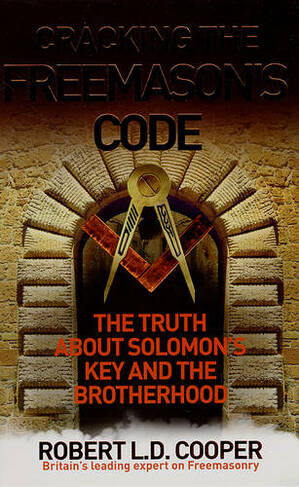 Cracking the Freemason's Code: The Truth About Solomon's Key and the Brotherhood

By Robert Cooper (Author)
Paperback
https://www.whsmith.co.uk/products/cracking-the-freemasons-code-the-truth-about-solomons-key-and-the-brotherhood/robert-cooper/paperback/9781846040498-01-000.html £11.95 rrp £12.99 Save £1.04 (8%)
GBP
Availability
Currently unavailable. We don't know when or if this item will be back in stock
Share

In Cracking the Freemason's Code, Robert Cooper explains exactly who the Freemasons are and what they do. As the Curator of the Scottish Masonic Museum and Library, the author is in a unique position to reveal the secret history of this elect brotherhood. Prompted by growing public interest and provoked by the controversial stories that circulate about Freemasonry, this is the first time that he has chosen to do so. Cracking the Freemason's Code is written with an insider's knowledge and privileged access to archive material, including never-before published images. It lays bare the intriguing symbolism, beliefs and history of the Masons, and explains the structure of Freemasonry, its ethos and connections to other secret societies. It also discloses the identities of famous Masons and the locations of important Masonic sites. This is the book that answers once and for all any questions readers may have about what Freemasonry is and the role it has played in shaping our society.

Robert Cooper is an acclaimed authority on Freemasonry and a member of the Grand Priory of Scotland, whose 2005 lecture tour took him across five continents in 77 days, addressing audiences in the UK, Australia, New Zealand, Hong Kong, South Africa, India, and the United States. Also a member of the Supreme Council of Scotland, the Royal Order of Scotland and the Grand Conclave of Scotland, he has appeared many times in the media, most recently in The Real Da Vinci Code, presented by Tony Robinson.