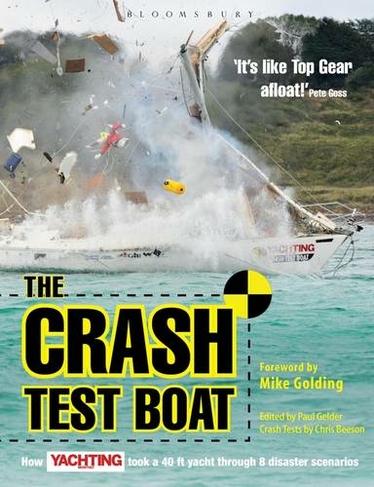 From the people behind the UK's leading sailing magazine for cruisers comes Crash Test Boat, a dramatic documentation of controlled sailing disasters which has the potential to save the lives of each and every seaman who buys it. Crash Test Boat is unique in its field, with no other title on the market aimed at explicitly revealing at first hand what happens when a boat encounters a major disaster. On the spot reporting with action photographs show what happens when typical family boats fall victim to eight different types of sailing disaster. How quickly does a cabin fill with water when the hull is holed? How do you control a gas leak or fire on board? What should you do first when dealing with a dismasting or a capsize through 360 degrees? By providing cruising and racing yachtsmen with vivid accounts of such extreme events, Crash Test Boat equips the reader with vital knowledge on what to do if disaster strikes and, ultimately, gives everyone on board a greater chance of survival if the boat is overcome. It is a fascinating, enlightening and instructive read. Each chapter opener is accompanied by a scannable QR code that takes the reader directly to the live-action YouTube footage of the relevant crash test, with informative and engaging commentary throughout from the Crash Test Team.

Paul Gelder, editor of Yachting Monthly for 10 years - from 2002 to February 2012 - is no stranger to disaster at sea. He has edited two best-selling anthologies of true-life sailing disasters, Total Loss, plus its companion volume, Sunk Without Trace (Adlard Coles Nautical). He has also written three books on round the world sailing events, including The Loneliest Race, covering the 1994-95 BOC Around Alone race, and Gipsy Moth IV: A Legend Sails Again (Wiley Nautical). He was presented with the Ocean Cruising Club's Award of Merit in 2005 for launching the campaign to save Sir Francis Chichester's famous ketch Gipsy Moth IV, which sailed around the world on the 40th anniversary of her first epic voyage.