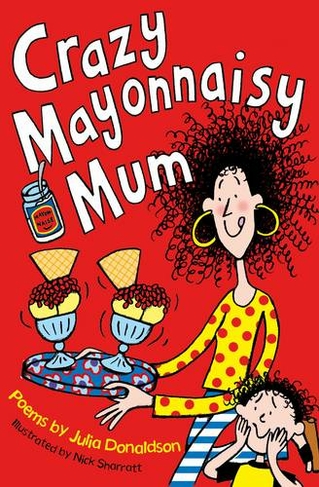 Crazy Mayonnaisy Mum is packed with all sorts of poems and rhymes including a sequence of number rhymes, action rhymes, noisy rhymes and more thoughtful pieces too. If tigerlilies and dandelions growled, And cowslips mooed, and dogroses howled, And snapdragons roared and catmint miaowed, My garden would be extremely loud. Crazy Mayonnaisy Mum is a fantastic collection of funny, silly and entertaining poems for the very young from acknowledged master of rhyme and author of The Gruffalo, Julia Donaldson.

Julia Donaldson has written some of the world's best-loved children's books, was the UK Children's Laureate 2011-13 and has been honoured with a CBE for Services to Literature. Her books include Sharing a Shell, the bestselling smash-hit What the Ladybird Heard and the modern classic The Gruffalo, which has sold over 13.5 million copies worldwide and has been translated into over sixty languages. Julia also writes fiction as well as poems, plays and songs and her brilliant live children's shows are always in demand. Julia and her husband Malcolm divide their time between Sussex and Edinburgh. Lydia Monks is one of the most original picture book artists working today. Her distinctive use of colour and collage has won her critical acclaim and several awards, including the Smarties Prize. Her collaborations with Julia Donaldson include The Singing Mermaid, the Princess Mirror-belle books, Sugarlump and the Unicorn, and the phenomenally successful What the Ladybird Heard. Lydia lives in Sheffield.