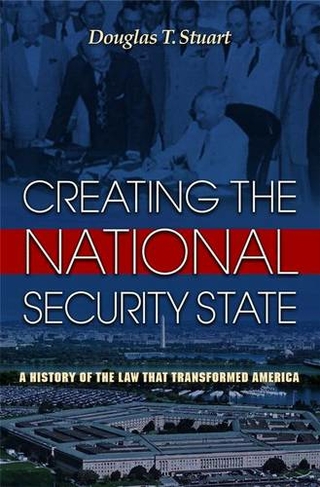 Creating the National Security State: A History of the Law That Transformed America

For the last sixty years, American foreign and defense policymaking has been dominated by a network of institutions created by one piece of legislation--the 1947 National Security Act. This is the definitive study of the intense political and bureaucratic struggles that surrounded the passage and initial implementation of the law. Focusing on the critical years from 1937 to 1960, Douglas Stuart shows how disputes over the lessons of Pearl Harbor and World War II informed the debates that culminated in the legislation, and how the new national security agencies were subsequently transformed by battles over missions, budgets, and influence during the early cold war. Stuart provides an in-depth account of the fight over Truman's plan for unification of the armed services, demonstrating how this dispute colored debates about institutional reform. He traces the rise of the Office of the Secretary of Defense, the transformation of the CIA, and the institutionalization of the National Security Council. He also illustrates how the development of this network of national security institutions resulted in the progressive marginalization of the State Department. Stuart concludes with some insights that will be of value to anyone interested in the current debate over institutional reform.

Douglas T. Stuart holds the J. William Stuart and Helen D. Stuart Chair in International Studies at Dickinson College. He is also an adjunct professor at the U.S. Army War College. His books include The Limits of Alliance: NATO Out-of-Area Problems since 1949 and Organizing for National Security.