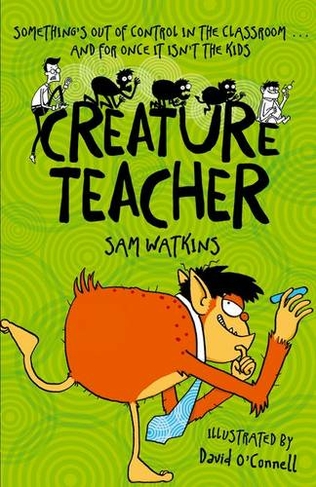 Also available on eBook. Click here to purchase from Kobo.com
Jake's class finally has the best teacher in the whole world, Mr Hyde. He doesn't make them clean toilet bowls with toothbrushes and his lessons are always fun. There is just one teeny, tiny, HUGE problem. Mr Hyde transforms into a naughty, little creature whenever he becomes upset. The creature has some amazing abilities but being well-behaved isn't one of them! Jake's class will have to use all their ingenuity to hide the creature, so they can keep their brilliant teacher. But Mrs Blunt, their headmistress, is never far off the scent . . . B/W

Sam Watkins voraciously consumed books from a young age, due to a food shortage in the village where she grew up. This diet, although not recommended by doctors, has given her a lifelong passion for books. She has been a bookseller, editor, and publisher, and writes and illustrates her own children's books. At one point, things all got a bit too bookish so she decided to be an art teacher for a while, but books won the day in the end. She has a five-year-old son, a yellow camper van called Daphne and six stick insects called Sticky. She can sometimes be found dangling from rocks or strumming her guitar at a campfire and singing silly songs about cockatoos. David O'Connell is a writer and illustrator living in London, UK. His favourite things to draw are monsters, naughty children (another type of monster), batty old ladies and evil cats! See his website scribblehound.com for more. He loves comics too, and has had work published in anthologies such as Birdsong, Solipsistic Pop, Paper Science a