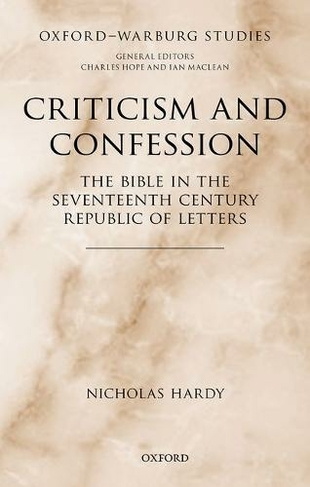 Criticism and Confession: The Bible in the Seventeenth Century Republic of Letters (Oxford-Warburg Studies)

The period between the late Renaissance and the early Enlightenment has long been regarded as the zenith of the 'republic of letters', a pan-European community of like-minded scholars and intellectuals who fostered critical approaches to the study of the Bible and other ancient texts, while renouncing the brutal religio-political disputes that were tearing their continent apart at the same time. Criticism and Confession offers an unprecedentedly comprehensive challenge to this account. Throughout this period, all forms of biblical scholarship were intended to contribute to theological debates, rather than defusing or transcending them, and meaningful collaboration between scholars of different confessions was an exception, rather than the norm. 'Neutrality' was a fiction that obscured the ways in which scholarship served the interests of ecclesiastical and political institutions. Scholarly practices varied from one confessional context to another, and the progress of 'criticism' was never straightforward. The study demonstrates this by placing scholarly works in dialogue with works of dogmatic theology, and comparing examples from multiple confessional and national contexts. It offers major revisionist treatments of canonical figures in the history of scholarship, such as Joseph Scaliger, Isaac Casaubon, John Selden, Hugo Grotius, and Louis Cappel, based on unstudied archival as well as printed sources; and it places those figures alongside their more marginal, overlooked counterparts. It also contextualizes scholarly correspondence and other forms of intellectual exchange by considering them alongside the records of political and ecclesiastical bodies. Throughout, the study combines the methods of the history of scholarship with techniques drawn from other fields, including literary, political, and religious history. As well as presenting a new history of seventeenth-century biblical criticism, it also critiques modern scholarly assumptions about the relationships between erudition, humanistic culture, political activism, and religious identity.

Nicholas Hardy is currently Munby Research Fellow in Bibliography at the University Library and Darwin College, Cambridge. His research interests cover early modern humanism, intellectual history, classical reception studies, and the history of the book. He took a BA (2008) in Classics and English at Corpus Christi College, Oxford, and then an MSt (2009) and DPhil (2012) in English, also at Oxford, before joining Trinity College, Cambridge to take up a four-yearResearch Fellowship in 2012. He has also held visiting fellowships at the Scaliger Institute, Leiden University Library, and the Folger Institute in Washington, DC.