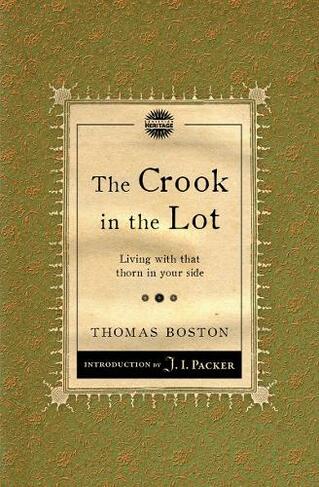 Crook in the Lot: Living with that thorn in your side (Revised edition)

By Thomas Boston (Author)
Paperback
£5.39 rrp £5.99 Save £0.60 (10%)
GBP
Availability
In Stock
Free Delivery Available When You Spend £25 Or More
Details
Spend £25 On Products To Receive Free Standard Delivery To Your Home Or Free Next Day Click and Collect To Stores
Share

First published in 1737 this book holds a special place among the tremendous amount of Puritan literature that was produced during that time. Thomas Boston was renowned for his clearly understood English and the manner in which he maintained that clarity while conveying messages of great depth. The Crook in the Lot is introduced to us by J. I. Packer. In an extensive prologue he shows how Boston's advice remains deeply relevant today. Boston was not preaching merely from his theological understanding, he was speaking from direct personal experience. Boston had real "thorns" to deal with himself, ranging from his wife's paralyzing depression to his own experiences living for years with what were probably kidney stones. He brings his own unique combination of wonderfully profound and yet immensely practical advice to bear to give us a work of lasting impact.

Thomas Boston held a pastorate with a very small Congregation in Simprin, Scotland until 1707. He was an extremely popular preacher, though self-effacing - considering that he had but "small talents." He was reluctant to publish his works, although he wrote out completely all of his sermons before they were preached. Many, however, came to be published after his death at the age of 57.