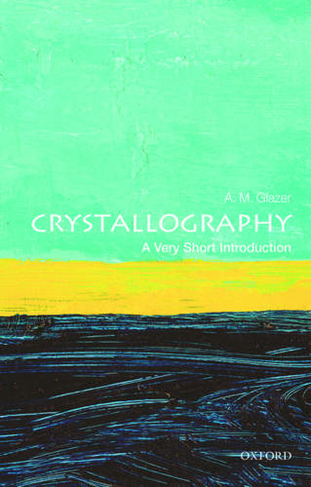 Crystals have fascinated us for centuries with their beauty and symmetry, and have often been invested with magical powers. The use of X-ray diffraction, first pioneered in 1912 by father and son William and Lawrence Bragg, enabled us to probe the structure of molecules, and heralded the scientific study of crystals, leading to an understanding of their atomic arrangements at a fundamental level. The new discipline, called X-ray crystallography, has subsequently evolved into a formidable science that underpins many other scientific areas. Starting from the determination of the structures of very simple crystals, such as that of common salt, today it has become almost routine to determine the positions of tens of thousands of atoms in a crystal. In this Very Short Introduction Mike Glazer shows how the discoveries in crystallography have been applied to the creation of new and important materials, to drugs and pharmaceuticals and to our understanding of genetics, cell biology, proteins, and viruses. Tracing the history of crystallography, he analyses astonishing developments in new sources of X-rays, as well as of neutrons, and in electron microscopy, and considers the impact they have on the study of crystals today. ABOUT THE SERIES: The Very Short Introductions series from Oxford University Press contains hundreds of titles in almost every subject area. These pocket-sized books are the perfect way to get ahead in a new subject quickly. Our expert authors combine facts, analysis, perspective, new ideas, and enthusiasm to make interesting and challenging topics highly readable. 41 black and white halftones and diagrams

Mike Glazer is Emeritus Professor of Physics at the University of Oxford and Visiting Professor at the University of Warwick. Originally trained as a chemist at the University of St. Andrews, he was one of the last research students of Professor Dame Kathleen Lonsdale, who had originally been a student of Sir William Henry Bragg. He was invited to the Cavendish Laboratory Cambridge by Dr. Helen D. Megaw to work on the structures of an important class of materialsknown as perovskites, and his classification of tilting of octahedra in these compounds has become internationally accepted. After seven years in Cambridge he was appointed as Lecturer in Physics in Oxford and Official fellow and Tutor in Physics at Jesus College Oxford. From 1996-2000 he was Presidentof the British Crystallographic Association. He was for many years Editor in Chief of the Journal of Applied Crystallography and in 2014 he was elected Vice President of the International Union of Crystallography.