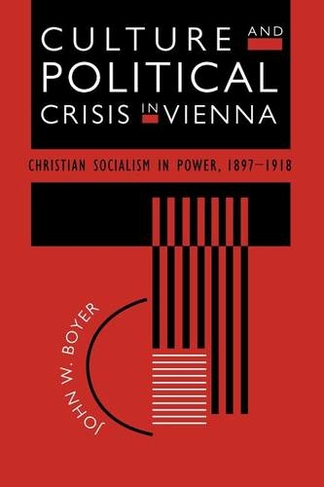 In this sequel to "Political Radicalism in Late Imperial Vienna", John Boyer continues the history of the Christian Social Movement after founder Karl Lueger's rise to power in Vienna in 1897. He traces its evolution from a group of disparate ward politicians, through its maturation into the largest single party in the Austrian parliament by 1907, to its major role in Imperial politics during the World War I. Boyer argues that understanding the unprecedented success that this dissident bourgeois political group had in transforming the basic tenets of political life is crucial to understanding the history of the Central European state and the ways in which it was slowly undermined by popular electoral politics. The movement's efforts to save the Austrian Empire by trying to create an economically-integrated but ethnically-pluralistic state are particularly enlightening today in the shadow of ethnic violence in Sarajevo, where the end of the Austrian Empire began in 1914. bibliography, index

John W. Boyer is the Martin A. Ryerson Distinguished Service Professor in History at the University of Chicago. In 2012, he was appointed to a fifth term as Dean of the College. A specialist in the history of the Habsburg Empire, he has written three books on Austrian history, including, most recently, Karl Lueger (1844-1910): Christlichsoziale Politik als Beruf.