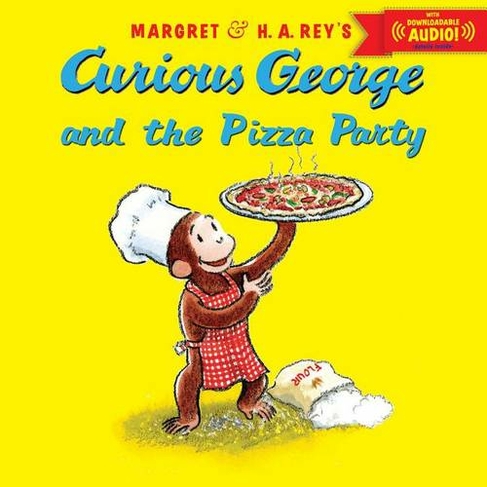 Curious George and the Pizza Party with Downloadable Audio

By H. A. Rey (Author), Margret Rey (Author)
Paperback
https://www.whsmith.co.uk/products/curious-george-and-the-pizza-party-with-downloadable-audio/h-a-rey/margret-rey/paperback/9780544109889-12-000.html N/A
GBP
Availability
Currently unavailable. We dont know when or if this item will be back in stock
Free Saver Delivery on orders over £25
Details
FREE SHIPPING over £25 for Saver Delivery
Share

George is going to a pizza party! George promises to be on his best monkey behavior, but when he gets to the party and sees all of that pizza dough, George has a big idea. With rolling pin in hand, George rolls and rolls and rolls until his big idea lands him in big trouble. But George's shaped pizzas turn out to be his biggest hits! This edition features a tasty veggie pizza recipe, put-the-steps-in-order activity, and downloadable audio! full colour illustrations throughout

Hans and Margret Rey created many books during their lives together, including Curious George, one of the most treasured classics of all time, as well as other favorites like Spotty and Pretzel. But it was their rambunctious little monkey who became an instantly recognizable icon. After the Reys escaped Paris by bicycle in 1940 carrying the manuscript for the original Curious George, the book was published in America in 1941. More than 200 Curious George titles followed, with 75 million books sold worldwide. Curious George has been successfully adapted into a major motion picture and an Emmy-winning television show on PBS. The Reys were born in Hamburg, Germany. Hans Augusto Rey (1898-1977) met his wife-to-be, Margret (1906-1996), at a party in her father's home in Germany; when he first caught a glimpse of her, she was sliding down the banister. In their twenties and thirties they lived in Paris and in Rio de Janeiro, where Hans sold bathtubs in villages along the Amazon River. Eventually Cambridge, Massachusetts, became the Reys' home and community. Throughout their lives the Reys created many lively books together, including SPOTTY, PRETZEL, and lift-the-flap books such as HOW DO YOU GET THERE? The manuscript of the first Curious George books was one of the few items the Reys carried with them on their bicycles when they escaped from Paris in 1940. Eventually, they made their way to the United States, and CURIOUS GEORGE was published in 1941. Their incorrigible little monkey has become an American icon, selling millions of books and capturing the hearts of readers everywhere. CURIOUS GEORGE has been published in many languages, including French, German, Japanese, Afrikaans, and Norwegian. Additional Curious George books followed, as well as such other favorites as CECILY G. AND THE NINE MONKEYS and FIND THE CONSTELLATIONS. Visit www.curiousgeorge.com.