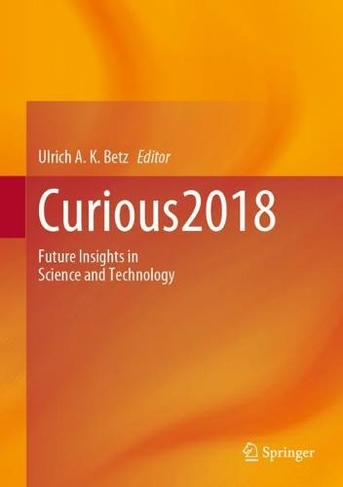 This book expands the debate on the future of science and technology at the Curious2018 - Future Insight Conference, held on the occasion of Merck's 350-year anniversary. In the respective chapters, some of the world's top scientists, managers and entrepreneurs explore breakthrough technologies and how they can be applied to make a better world for humanity. Divided into three parts, the book begins with an introduction to the vision of the conference and to the importance of curiosity for innovation, while also exploring the latest scientific developments that are shaping the future of healthcare, medicine, the life and material sciences, digitalization and new ways of working together. In the second part, particular attention is paid to new therapies and diagnostics; here, readers will learn how synthetic biology and chemistry are being used to solve problems that are essential to the future of humanity. The role of in-silico research is also discussed. In the final part of the book, readers will find some thoughts on ethical principles guiding our application of science and technology to create a bright future for humanity. Given its interdisciplinary appeal, the book will inspire curiosity in a wide readership, from scholars and researchers to professionals with an interest in exploring the future of science and technology, solving the problems of today, and paving the way for a better tomorrow. Chapters 1, 2, 3 and 17 are available open access under a Creative Commons Attribution-NonCommercial 4.0 International License via link.springer.com. 40 Tables, color; X, 162 p.

Dr. Ulrich A.K. Betz, Vice President of Innovation at Merck, is responsible for innovation management and strategic academic collaborations. He is an accomplished R&D manager with more than 20 years of experience in the pharmaceutical and chemical industry, including positions in the President's Office at Merck Biopharma, and positions reporting directly to the Heads of Research and Development at Bayer and Merck. In his current role, for example, he designed and implemented the Merck Innovation Cup, the Curious2018 - Future Insight Conference, the Merck Future Insight Prize, the Darmstadt Science Declaration, the idea competition innospire and the BioMed X Outcubator. Prior to joining Merck in 2005, he worked at Bayer AG for seven years, in various scientific and managerial positions in Pharma Research. Ulrich received his PhD in functional genomics and immunology from the University of Cologne, Germany, and his diploma in biochemistry and physiological chemistry from the University of Tubingen, Germany. He is a co-inventor of the marketed anti-viral drug Letermovir (Prevymis) and of Pritelivir (Phase II). Ulrich has won several innovation awards such as the German Industry Innovation Award (the world's oldest innovation award), two International Business Awards (Stevie Gold Awards Executive of the Year - Pharmaceuticals and Innovator of the Year), a Stevie Gold Germany Award (R&D Manager of the Year Germany), Edison Award, the Bio IT World Best Practice Award, and the German Idea Award. Ulrich is the author or co-author of over 90 publications (e.g. in Cell, Nature Medicine, and Nature Biotechnology).