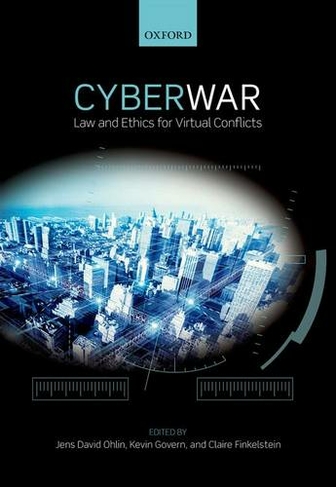 Also available on eBook for £32.75. Click here to purchase from Rakuten Kobo

Cyber weapons and cyber warfare have become one of the most dangerous innovations of recent years, and a significant threat to national security. Cyber weapons can imperil economic, political, and military systems by a single act, or by multifaceted orders of effect, with wide-ranging potential consequences. Unlike past forms of warfare circumscribed by centuries of just war tradition and Law of Armed Conflict prohibitions, cyber warfare occupies a particularly ambiguous status in the conventions of the laws of war. Furthermore, cyber attacks put immense pressure on conventional notions of sovereignty, and the moral and legal doctrines that were developed to regulate them. This book, written by an unrivalled set of experts, assists in proactively addressing the ethical and legal issues that surround cyber warfare by considering, first, whether the Laws of Armed Conflict apply to cyberspace just as they do to traditional warfare, and second, the ethical position of cyber warfare against the background of our generally recognized moral traditions in armed conflict. The book explores these moral and legal issues in three categories. First, it addresses foundational questions regarding cyber attacks. What are they and what does it mean to talk about a cyber war? The book presents alternative views concerning whether the laws of war should apply, or whether transnational criminal law or some other peacetime framework is more appropriate, or if there is a tipping point that enables the laws of war to be used. Secondly, it examines the key principles of jus in bello to determine how they might be applied to cyber-conflicts, in particular those of proportionality and necessity. It also investigates the distinction between civilian and combatant in this context, and studies the level of causation necessary to elicit a response, looking at the notion of a 'proximate cause'. Finally, it analyses the specific operational realities implicated by particular regulatory regimes. This book is unmissable reading for anyone interested in the impact of cyber warfare on international law and the laws of war.

Jens Ohlin's research and teaching interests are focused on criminal law theory, public international law, and international criminal law. He is the author, with George Fletcher, of Defending Humanity: When Force is Justified and Why (Oxford University Press, 2008), which offers a new account of international self-defence through a comparative analysis of the rules of self-defence in criminal law. His scholarly work has appeared in top law reviews and journals,including the Columbia Law Review, Cornell Law Review, Harvard International Law Journal, American Journal of International Law, and several OUP edited volumes. His current research focuses on the normative application of criminal law concepts in international criminal law, especially with regard togenocide, torture, joint criminal enterprise and co-perpetration, as well as the philosophical foundations of collective criminal action.Kevin Govern is Associate Professor of Law at the Ave Maria School of Law. Professor Govern began his legal career as an Army Judge Advocate, serving 20 years at every echelon during peacetime and war in worldwide assignments involving every legal discipline. He has also served as an Assistant Professor of Law at the United States Military Academy and has taught at California University of Pennsylvania. He has published widely and spoken frequently on international and comparative law, nationalsecurity and homeland security law, military operations, and professional ethics.Claire Finkelstein is the Algernon Biddle Professor of Law and Professor of Philosophy at the University of Pennsylvania, and a co-Director of the University of Pennsylvania Institute of Law and Philosophy. She writes in the areas of criminal law theory, moral and political philosophy, philosophy of law, international law, and rational choice theory. A particular focus of her work is bringing philosophical rational choice theory to bear on legal theory, and she is particularly interested intracing the implications of Hobbes' political theory for substantive legal questions. Recently she has also been writing on the moral and legal aspects of government-sponsored torture as part of the U.S. national security program. In 2008 Finkelstein was a Siemens Fellow at the American Academy inBerlin, during which time she presented papers in Berlin, Leipzig, and Heidelberg.