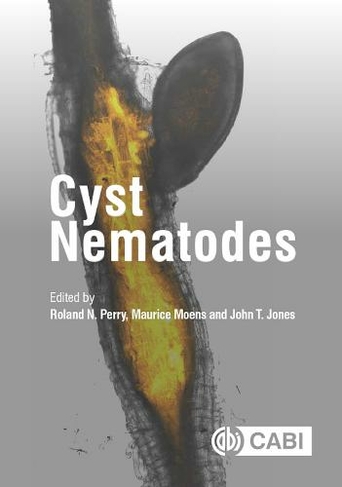 This book is a compendium of current information on all aspects of these economically important parasites. It provides comprehensive coverage of their biology, management, morphology and diagnostics, in addition to up-to-date information on molecular aspects of taxonomy, host-parasitic relationships and resistance. Written by a team of international experts, Cyst Nematodes will be invaluable to all researchers, lecturers and students in nematology, parasitology, agriculture and agronomy, industries with an interest in chemical and biological control products for management of plant-parasitic nematodes, and any courses, quarantine and advisory services.

Roland N Perry (Edited By) - Roland N. Perry is based at University of Hertfordshire, UK and is a Visiting Professor at Ghent University, Belgium. He graduated with a BSc (Hons) and PhD in Zoology from Newcastle University, UK. His research interests have centred primarily on plant-parasitic nematodes, especially focusing on nematode hatching, sensory perception, behaviour and survival physiology. He is co-editor of four books and author or co-author of over 40 book chapters and refereed reviews and over 110 refereed research papers. He is Editor-in-Chief of Nematology and Chief Editor of the Russian Journal of Nematology. He co-edits the book series Nematology Monographs and Perspectives. Maurice Moens (Edited By) Professor Maurice Moens is Honorary Director of Research at the Institute for Agriculture and Fisheries Research (ILVO) at Merelbeke, Belgium and honorary professor at Ghent University, Belgium where he gave a lecture course on Agro-nematology at the Faculty of Bioscience Engineering. He is a past-director of the Post Graduate International Nematology Course (MSc Nematology) and coordinator of the Erasmus Mundus - European Master of Science in Nematology, where he gave five lecture courses on Plant Nematology. The MSc course is organised in the Faculty of Sciences of Ghent University. He graduated as an agricultural engineer from Ghent University and obtained a PhD at the same University on the spread of plant-parasitic nematodes and their management in hydroponic cropping systems. Within the framework of the Belgian Cooperation, he worked from 1972 to 1985 as a researcher in crop protection, including nematology, at two research stations in Tunisia. Upon his return to Belgium, he was appointed as senior nematologist at the Agricultural Research Centre (now ILVO). There, he expanded the research in plant nematology over various areas covering molecular characterization, biology of host-parasite relationships, biological control, resistance and other forms of non-chemical control. He was appointed head of the Crop Protection Department in 2000 and became Director of Research in 2006. He retired from both ILVO and Ghent University in 2012 but continues to supervise PhD students. In 2001, he was elected Fellow of the Society of Nematologists (USA) for outstanding contributions to Nematology; in the same year he was elected Fellow of the European Society of Nematologists for outstanding contribution to the science of Nematology; and in 2012 he was elected Honorary Fellow of the Chinese Society for Plant Nematology. He supervised 23 PhD students, who now are active in nematology all over the world. Currently, he is the president of the European Society of Nematologists. He co-edited Root-knot Nematodes (2009) and the first edition of this text book, Plant Nematology (2006). He is author or co-author of ten book chapters and refereed reviews and over 150 refereed research papers. He is a member of the editorial board of Nematology, Annals of Applied Biology and the Russian Journal of Nematology. John T Jones (Edited By) - John T. Jones is Research Leader in Plant Nematology at The James Hutton Institute, Professor in the School of Biology, University of St Andrews, and Guest Professor at the University of Ghent. He is a senior editor of Molecular Plant Pathology (Wiley) and editorial board member for PLoS One (2013-present), Molecular Plant Pathology (2012 - 2014), International Journal for Parasitology (2003-2009), Nematology (2003-present) and Journal of Helminthology (2003 - present). He has over 70 refereed publications, is co-editor of two books and contributor several other chapters.