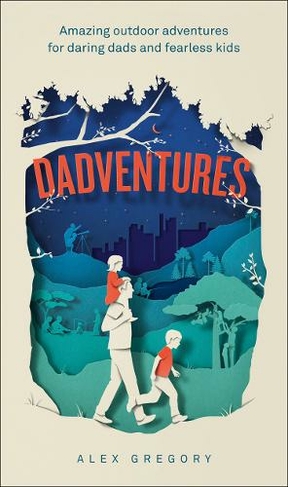 By Alex Gregory (Author)
Hardback
https://www.whsmith.co.uk/products/dadventures-amazing-outdoor-adventures-for-daring-dads-and-fearless-ki/alex-gregory/hardback/9780008283704-12-000.html £10.65 rrp £12.99 Save £2.34 (18%)
GBP
Availability
In Stock
Free Delivery Available When You Spend £15 Or More
Details
Spend £15 On Eligible Products To Recieve Free Standard Delivery To You Home Or Free Next Working Day Click And Collect To Store
Share

Also available on eBook for £5.89. Click here to purchase from Rakuten Kobo

The ultimate family activity guide for busy daring dads in need of a little inspiration to spend quality time with their kids, by double Olympic gold medallist rower, adventurer and father of three, Alex Gregory. `Time is the one resource we can't buy but we all want. It's so important to make the most of the time we have and create lasting memories.' For a parent, leaving the house can sometimes be the hardest part. But outside is where adventures and memories are waiting to be made... From after-school adventures to an overnight trip, double Olympic gold medallist rower and father-of-three Alex Gregory shares exciting ideas for enjoying time together as a family, in all seasons. Whether you have 30 minutes to do homework up a tree, or a whole day to build an ancient bridge, you can delve in together and be inspired by this practical, easy guide for all ages. Divided into categories to fit whatever time slots work within the day, the book contains chapters such as After-School Adventures, 30-Minute Activities, Two-Hour Missions, Half-Day Experiences, Full-Day Adventures, Overnight Expeditions and Pushing Away from Land. No matter how much time you have, make it count with `Dadventures' - the ultimate guide to ditching the routine and having fun with your kids. 50 b/w illus

Alex Gregory MBE is a two time Olympic Gold medallist, five time World champion and World record holder for the Great Britain Men's Rowing team. In August 2017 he took part in The Polar Row, a pioneering Arctic rowing expedition where he and his crew successfully forged a route across un-rowed Arctic waters, breaking numerous world records in the process. Alex has now retired from competitive sport and his three children Jasper, Daisy and Jesse have been a huge motivation for him pursuing another passion of his, living and experiencing the outdoors and well as inspiring others through motivational speaking. As a proud patron of the British Exploring society, Alex is intent on sharing his knowledge, experience, and the fantastic benefits that time outdoors brings to the whole family.